The {NewNew} Blog and Me 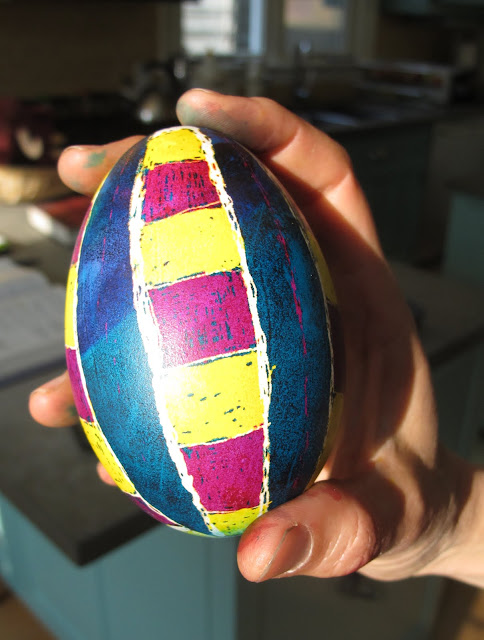 For a while now I've had the pleasure and good fortune both to belong to an amazing collective of local crafters and artisans called The {NewNew}. I've recently started contributing to our team blog, so wanted to give it a plug here. A few days ago I posted about learning to make Ukrainian pysanky easter eggs (photo above). I can tell already that this is going to be a new craft addiction for me. I just need my little kids to get a little older before I bring hot wax into the crafting mix at our house. Read all about my adventures in pysanky here, and please be sure to share any comments or photos on the blog as well. And Happy Spring!
Posted by Leslie Astor at 2:15 PM No comments: 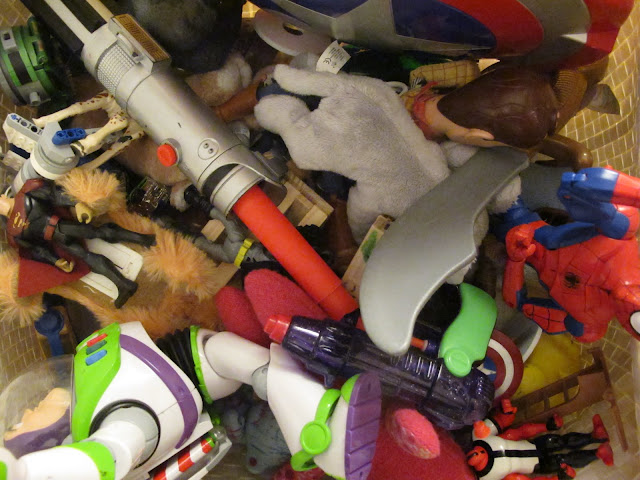 Sigh. My boys and their toys. I like to think of myself as a friend of the earth. And it occurs to me that I characterize myself in these posts as someone who succeeds in steering my kids away from the standard American diet of crappy plastic playthings. Not so. The shocking truth is that the bulk of my childrens' toys are not made from granola and hemp. Moreover, the types of toys my kids favor consistently shatter my hopes and dreams for Sunday afternoons spent engaged in Waldorf-inspired play. I mean, wooden and velcro veggie sets and tie-dye silk scarves are so much fun, right? Yet any one of my boys would take our one-armed Superman over the fake food on just about any given day.

This past week all three of my boys have been sick. Its been a bummer, with the single upside that they're all opting for mellower play time than usual. Yesterday Charlie dragged out a game of concentration that I had forgotten we even had, played with me for half an hour at the kitchen table, again at the doctor's office, and again when we got home. Highly unusual. But such a welcome respite for me from the typical light saber battle, or having to pretend I'm Buzz Lightyear, or the Flash or Tintin.

Last night on a whim I dragged out some fat quarters of fabric and decided to sew up some bags to make a bean bag toss. I figured we could play outside on the stoop for a while, since a little fresh air and sunshine is always a welcome break from these long, if rare, stretches spent in the belly of the house. I had delusions of grandeur about also making some cool buckets or baskets to throw the bags into, but those'll have to happen some other time.

I finished up the sewing this afternoon, while Michael helped me empty the cupboards of unused legumes to fill the bags (two birds with one stone!). 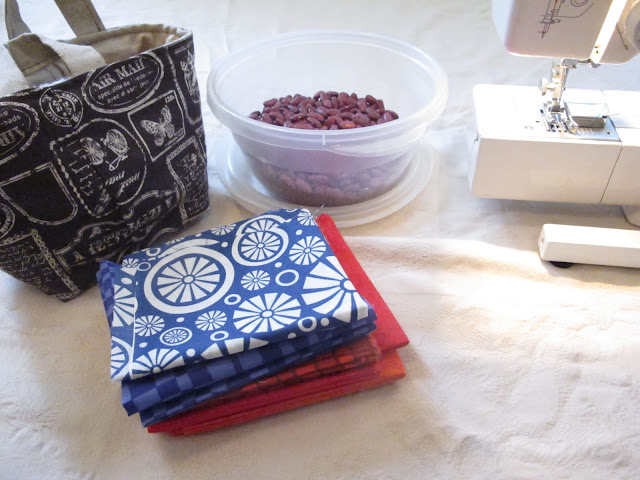 Here's what I/we did:

Using two fat quarters of different fabric, I cut six rectangles from each. Each rectangle measured about 4 1/2" x 9". I pinned each piece together, right sides facing each other, and sewed around the perimeter of the bags (even along the folded bottom). I backstitched at the beginning and end of the seams for strength. I left an opening of about an inch and a half. 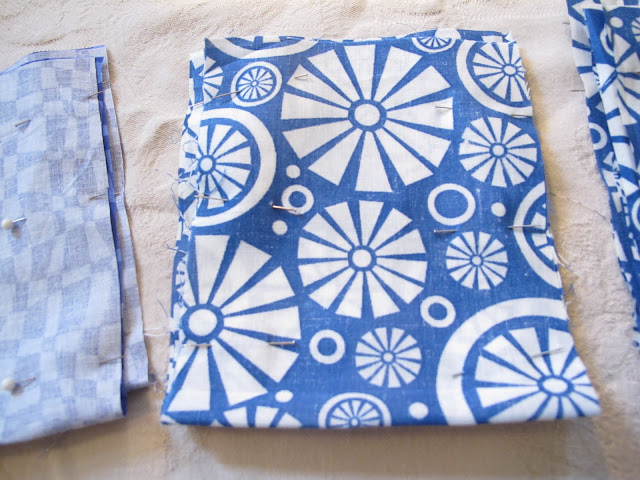 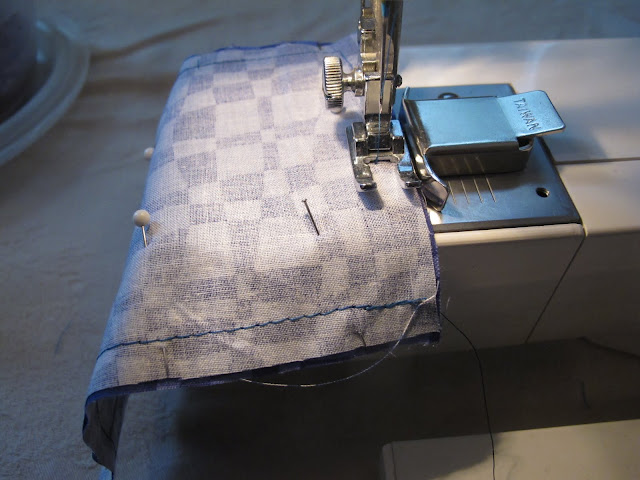 I removed the pins, and used a chopstick (or pen or point turner or whatever you have lying around) and turned the bags right side out. 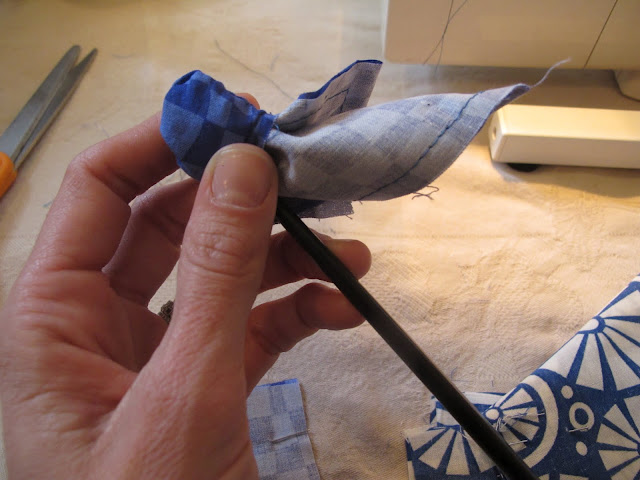 I folded down the opening seam and ironed the bag. 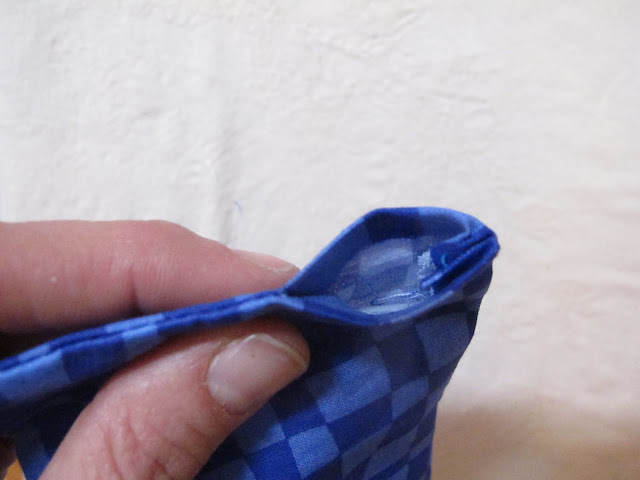 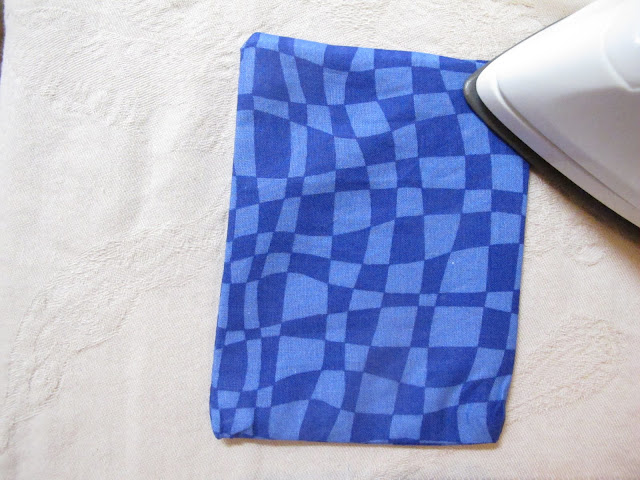 I used a rolled up piece of card stock (actually, a math flash card, but whatever) as a funnel, and stuck the end into the hole in the bag. For the filling I used dried kidney beans, and also rice, lentils and black beans. I have so much more space in my pantry now. I filled the bags about three quarters of the way, so I'd have space to slide the seam into my machine to sew the opening closed. 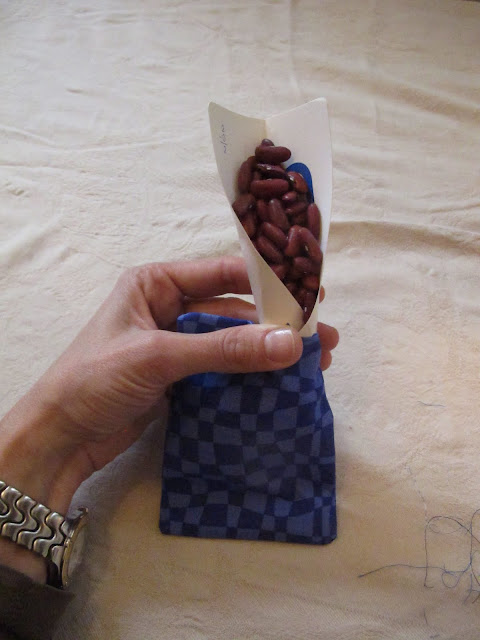 If at all possible, you'll want to recruit an able bodied assistant to help you fill your bags. You will generally find that said assistant's enthusiasm for the resulting product will be exponentially increased as a result of his/her participation in said project. 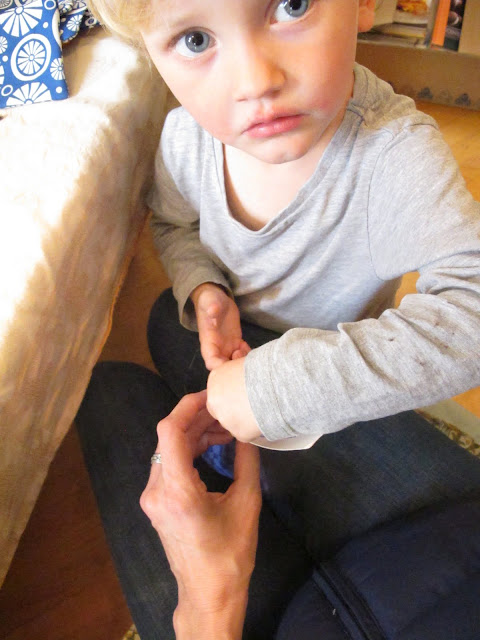 To close the bags I topstitched the openings on the machine, but this was tricky as hell. Keeping the filling from moving down towards the seam while I stitched was nearly impossible, so backstitching was a completely Sisyphean task. Its fine if you don't really care about the topstitch looking a little sloppy. If you do care, you can sew the seam closed by hand.

I made six of each patterned bag. And here they are. 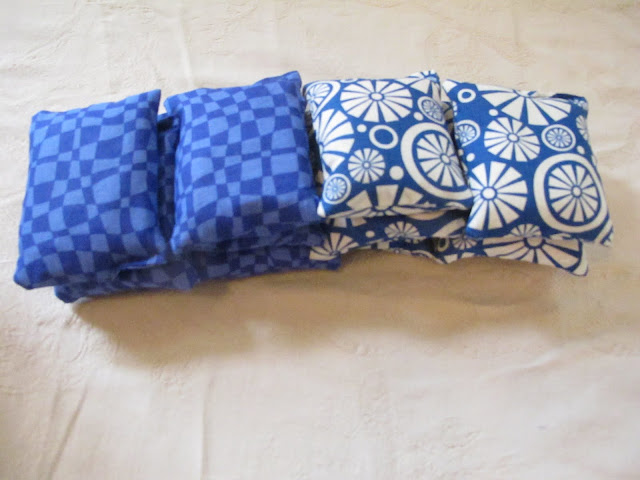 Next my two little friends and I repaired to the stoop, where we brought a couple of tupperware containers and a pot. With chalk I marked how many points each target was worth on the corresponding step, and I also drew a line in chalk for the contestants to stand behind for throwing. Like pretty much every line I draw for these boys, this one was largely ignored. But I drew it anyhow. 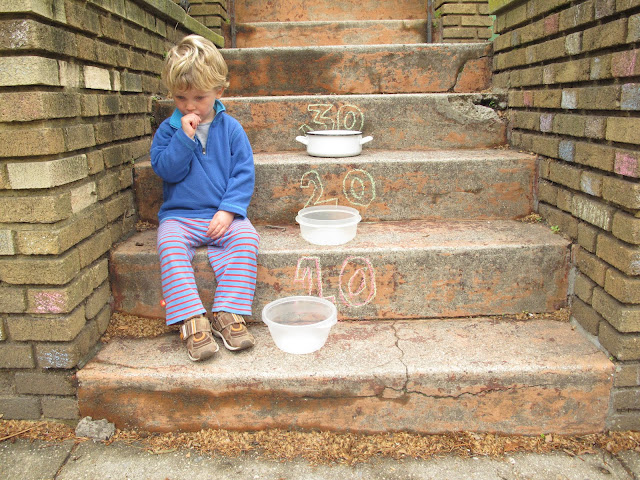 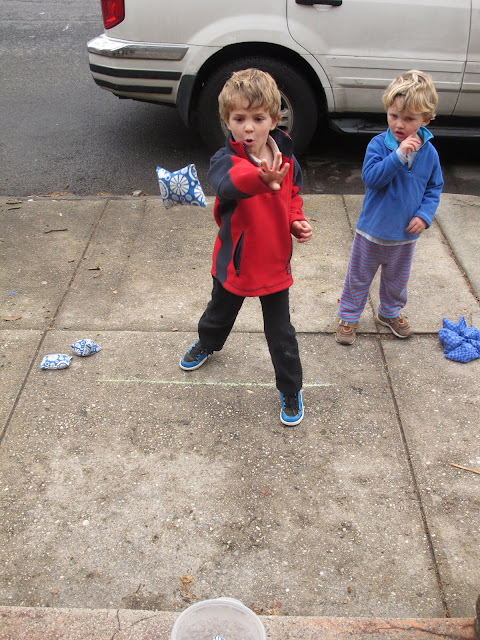 They had a lot of fun, managed to wait patiently for their turns, made a few shots, and cheated a lot. (Witness the score board below.) A couple of passers by stopped to have turns, which my guys willingly forked over their bags to accomodate. It was just the right activity for a sick day outside. 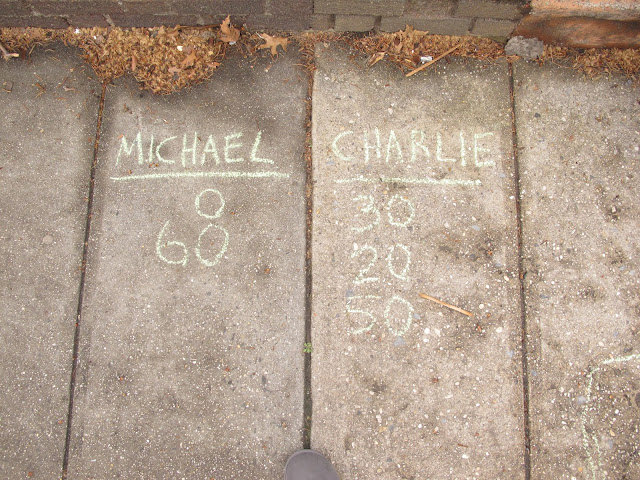 When Jake got home from school (he's done being sick), he had a few tosses too. By the time he arrived Charlie had already moved the targets up to the top of the stoop for some extra challenging shots. Once the novelty of this game wears off, they can go back to their one armed superheroes. But I might keep trying to come up with other games we can play. This one was fun to make, especially with Michael helping me. And I'll keep pondering ways to make up some receptacles for this game, so look for that in a future post. 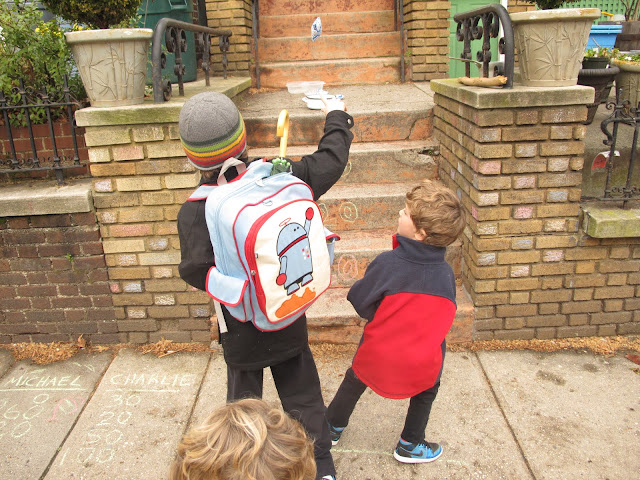 Email ThisBlogThis!Share to TwitterShare to FacebookShare to Pinterest
Labels: bean bag toss, games to make for kids, games you can make, hand made games, make your own bean bag toss, playing on the stoop, things to make with fat quarters 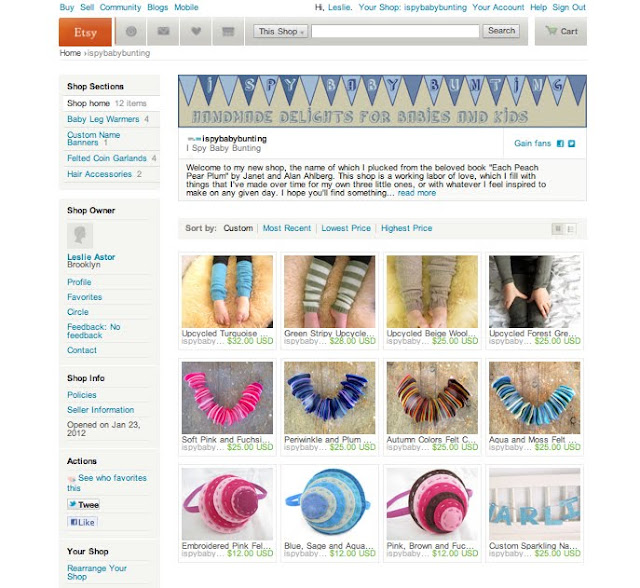 Well, its a little premature, but I couldn't wait to share the news that my new Etsy shop is unofficially officially up and running. May I present I Spy Baby Bunting, a repository for little childhood delights that I loved making so much, I decided to make them available for anyone else who might like them too. Right now I've only got a few items for sale, but there'll be more coming down the pike soon, including additional sparkly banners, hair accessories, custom embroidered decor and a few soft toys. I am in the market for a few little models, so if you're baby is dying to show off his or her legs or model a headband, give me a holler. I'll pay you in bath bombs.
Posted by Leslie Astor at 6:00 PM 1 comment: