Twas the Night Before Halloween... 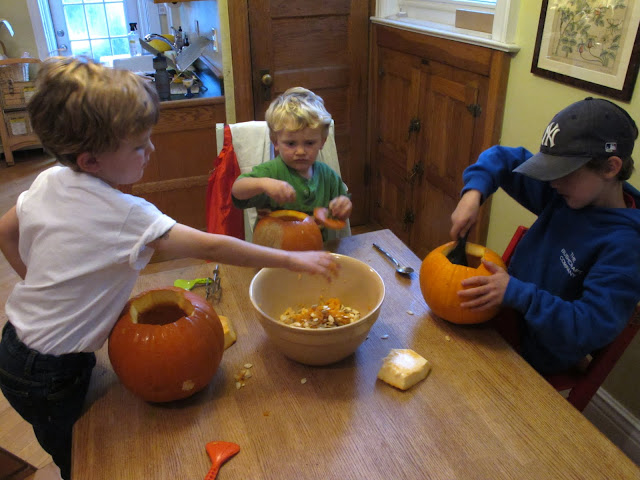 This is a procrastination post. Right now I'm supposed to be making yellow boots of some sort to finish the Flash costume that Charlie will be wearing for Halloween tomorrow. But I kind of need a break from Flash. He's too damn fast, and lately I've been feeling the need to slow down.

This afternoon the kids started carving their pumpkins (see above), though by the time they went off to bed the table was still covered with pumpkin guts and some stray seeds. I'll finish them tomorrow. I also still need to adjust the cape for Michael's Superman costume, which is the very same one I made for Charlie last spring. Phew. One thing I did not leave til the last minute this year because I really wanted to make them were trick or treating bags for the boys. Growing up, my four siblings and I always used pillow cases to collect our loot. Whether this was because we were hoping to get a LOT of candy or because they were just practical (probably both) I don't remember. But I thought it would be fun to give my kids some bags that were a little smaller, weren't covered in a floral Laura Ashley print, and that went along with each of their personalities.

These are cotton drawstring produce bags from Ecobags, which we also use for our produce and bulk dry goods at the grocery store. To convert them into trick or treat bags, I just downloaded some free, fun Halloween fonts online, typed the text out in a Word document, and printed them onto some Epson Iron On Transfer paper. 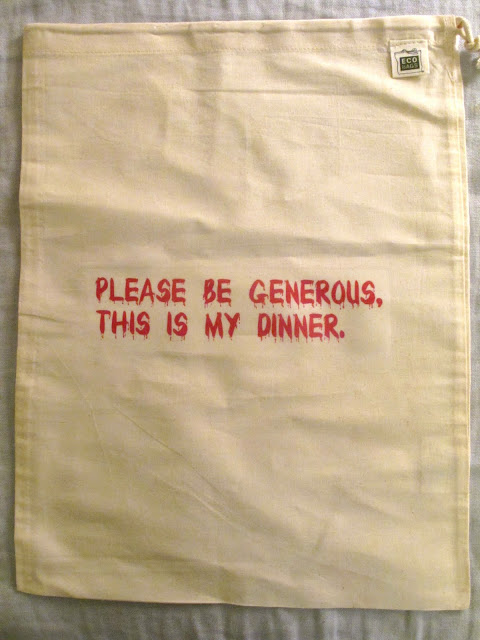 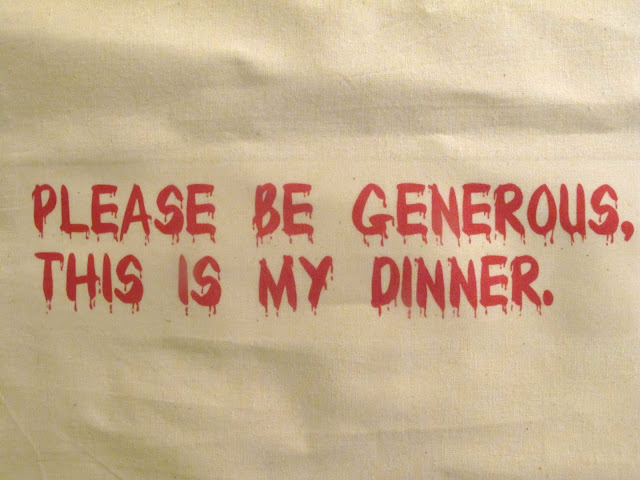 Above is Jake's bag. He loves the bloody font. Some of the kids in his class at school this year are scaring the pants off of each other with their theories about how one sees Bloody Mary on Halloween. Apparently it involves standing in the bathroom with the lights off, flushing the toilet multiple times, and reciting a few select words while looking in the mirror. I had totally forgotten about this ghost story/urban myth from my own childhood until he started talking about it recently. 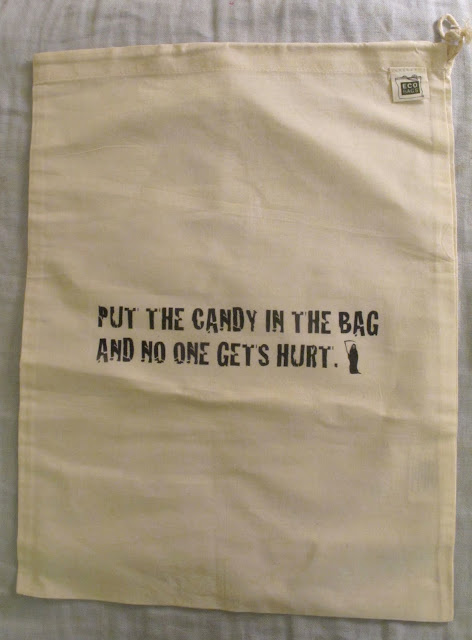 Charlie's bag is a remake of a tote I sold in my Etsy shop last year which had the same text in black on an orange bag. This suits my middle boy because he's such a tough customer. Seriously: if he comes to your house on Halloween, just give him the goods, nice and slow. You don't want any trouble from an angry Flash when he's coming down from a sugar high. But if you treat him right he's a real charmer. 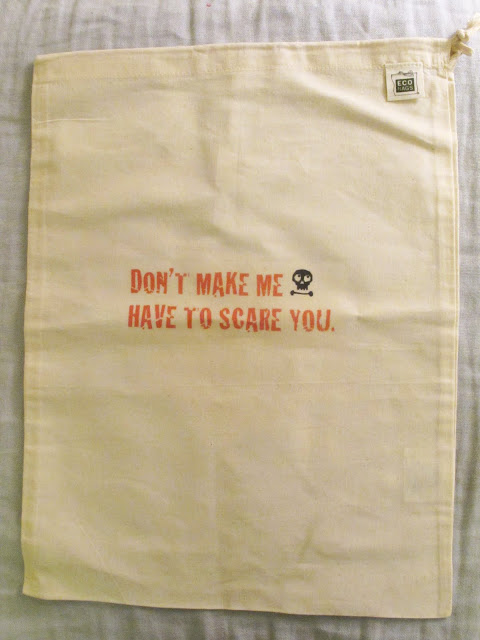 Michael gets this bag because he tries so hard to be a bad ass like his big brothers, and watching him threaten you might just be one of the funniest things you'll ever bear witness to. But how much of a tough guy can a curly, blond headed two year old with blue eyes the size of Oreos be? Actually, don't answer that.

Happy Halloween everyone. Photos of the boys in all of their costumed regalia will surely follow.

Posted by Leslie Astor at 6:24 PM No comments: 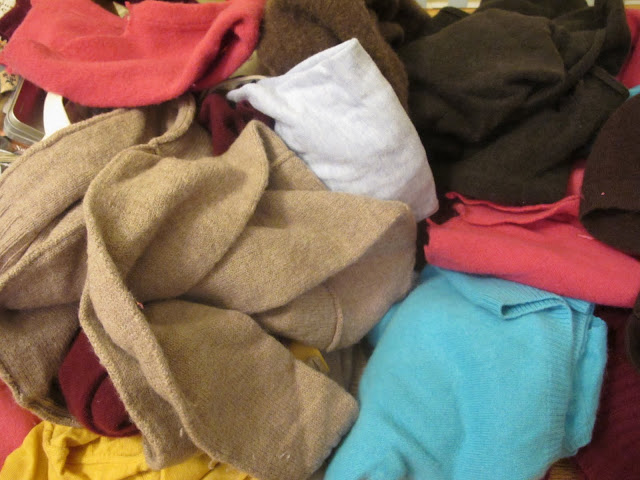 Can I tell you how much I love wool felt? More specifically, I love felting wool sweaters that I find at thrift stores. I love buying them, felting them, and then shoving them all into this big bag that I have set aside for my ever growing collection of felted wool thrift store sweaters. You could say I am a collector of felted wool and cashmere thrift store sweaters. But the collection is becoming unwieldy and my house, for some reason, isn't getting any bigger. So I need to start making some stuff with these sweaters. Last spring, I made a bunch of felted wool bunnies as baby gifts for friends. I opened the bag last night with plans to make another, for another new babe I know, but instead I decided to try something else. I picked out the softest, pinkest, cashmeriest sweater of the bunch, and made myself some baby legwarmers. Well, they're not for me, actually. They're for this baby called Elodie. But anyway. It was so easy to do, I almost feel like you can figure it out without me telling you how. But, okay, I will. 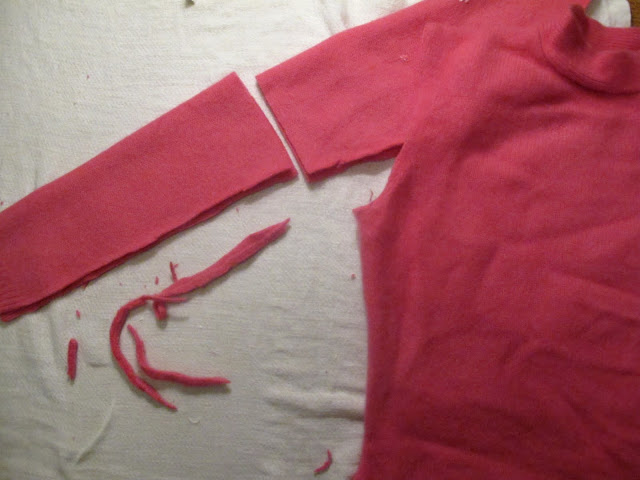 First I cut the sleeves of of the sweater. After I cut out the seam the fabric was about 6.5" wide. The cuffs will be the ankle cuffs of the leg warmers. I cut the length to 9". These may be a little long for infants under a year, but they'll grown into them in no time. 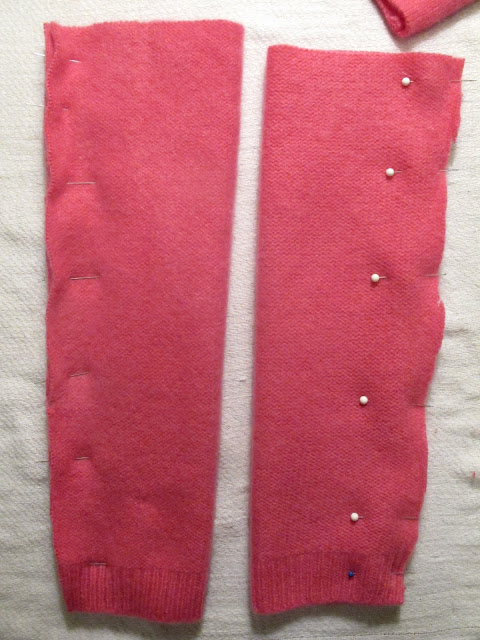 Next I cut the seam out of the sleeve, turned the sleeve inside out, and pinned the edges. Then I sewed each one with a quarter(ish) of an inch seam allowance. 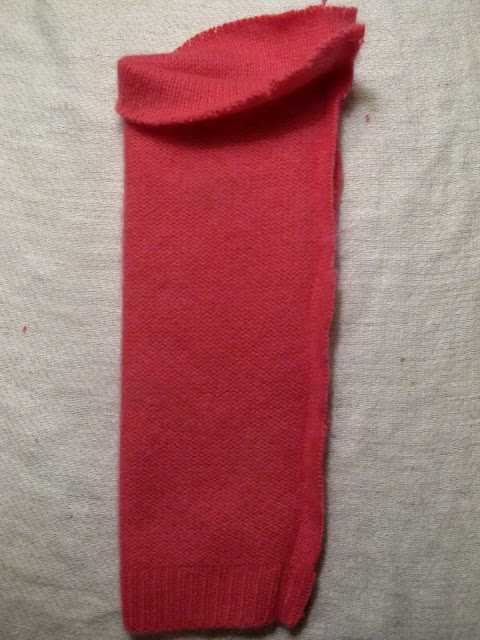 Finally, I turned the raw edges down, pinned them into place, and sewed a hem. 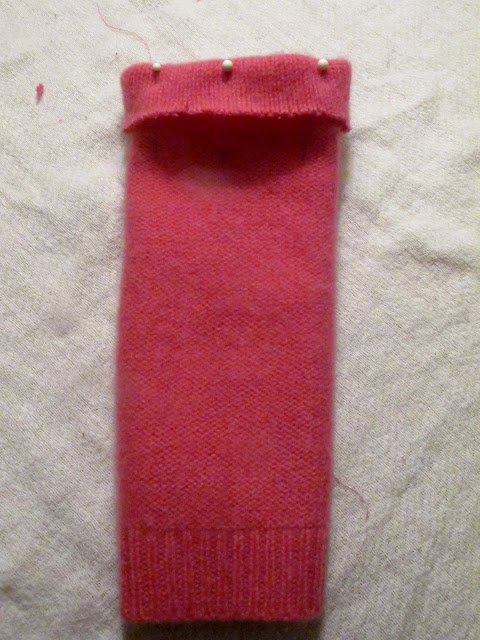 I turned them right side out, et Voila! These things are about 3 1/2" across lying flat, (though the cashmere still has plenty of stretch to it) and are intended as size 6-12 months. Probably they'll last a lot longer than that, since they have lots of room to grow in the length in particular. 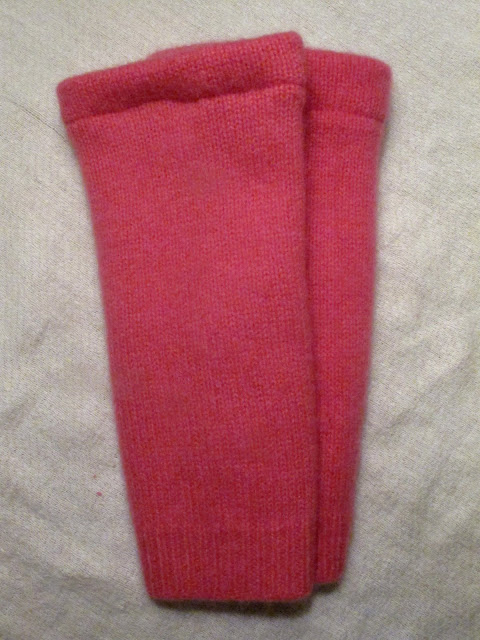 UPDATE 11/20/11
I had to add this picture of Elodie modeling her new leg warmers. Super adorable! 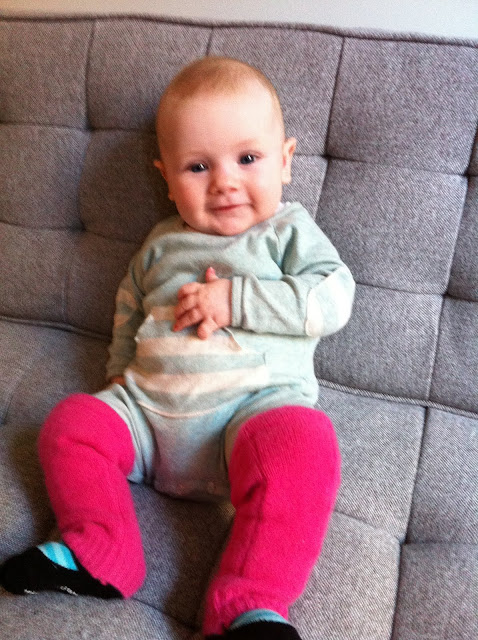 A Family That Eats Together... 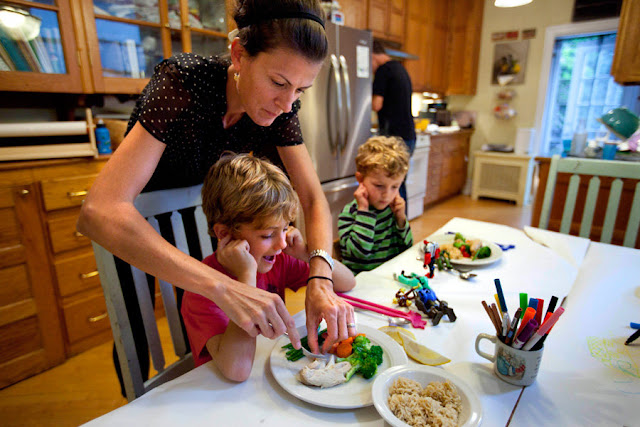 So we wound up in the newspaper. Well, not the paper, paper. Rather we were included in the online version of the Sunday New York Times Magazine, for an article about family dinners in America. (I had a bit of a laugh when I discovered that the photo they used of us is named "extra families slide", which made me feel kind of like we were leftovers. Still. It was cool to see us in the paper.)

I think the topic of family dinners is an important one, because I think in the answers to the questions about how we experience the evening meal are revelations to how we're living our lives in general. What kinds of food are we eating? Are we working too much or too late to make it home for dinner? Do we eat the same foods as our children or are we making separate meals for them? What kinds of things are happening around the act of meal preparation? (According to Jake, if you're in my house, you're watching very violent television.) But the question that's become most salient for me is: What actually happens once we're sitting down to the meal? I've written in earlier posts about how stressful a family meal can be at our table, because the kids fight, they may not eat as much (or at all) as we'd like, they get up from the table, etc., etc. This is consistently disappointing, because what we'd love to experience is a calm and connected time to wind down together and collectively recount the events of our day. In other words, our expectations for what the meal should be like are grossly at odds with the reality of our family dinners.

Recently I read an incredibly enlightening blog post written by the husband of a friend of mine (who herself writes an excellent blog on family and eating) who is a doctor specializing in eating disorders. His post, about the dynamic between parents and small children during meal time, for me served as a potent reminder (if the thought ever actually occurred to me at all) that this time, dinner time, with my children, functions as an extremely important opportunity for them to express themselves to my husband and I in ways that their words cannot always achieve. Sometimes at dinner the otherwise very independent Charlie is wanting desperately to sit in my lap, or he is an angry superhero who wants justice for his people (with the rest of us starring as the baddies). Sometimes the very capable Michael pretends to be a very small baby who needs me to feed him. Sometimes Jake, who usually finds his brother an interloping annoyance, chooses mealtime to invent games to play with Charlie. And because I want everyone to "behave" at dinner, my first instinct in any of these scenarios is often to try and deny my children their desires to deviate from my perceived norms of good table manners. I want them to sit. I want them to eat. I want them to do it politely and without a fuss. But A) I know this is a completely unrealistic expectation for me to have of them and B) I know that in those moments in which I'm able to relax and let them be who they are (playful, funny, silly, restless, boys, brothers) dinner is a better experience for all of us. Yes, they need to say please and thank you, yes they need to eat with utensils and behave a bit more like humans than like animals, but that's really it for now. Children evolve and mature. They even grow up. If I can use family dinners as an opportunity to practice presence of mind and acceptance of my family just as it is, I can probably have faith that someday these boys will eat with napkins in their laps. And the novelty of potty jokes might eventually wear off. Or maybe not.
Posted by Leslie Astor at 3:50 PM 1 comment: