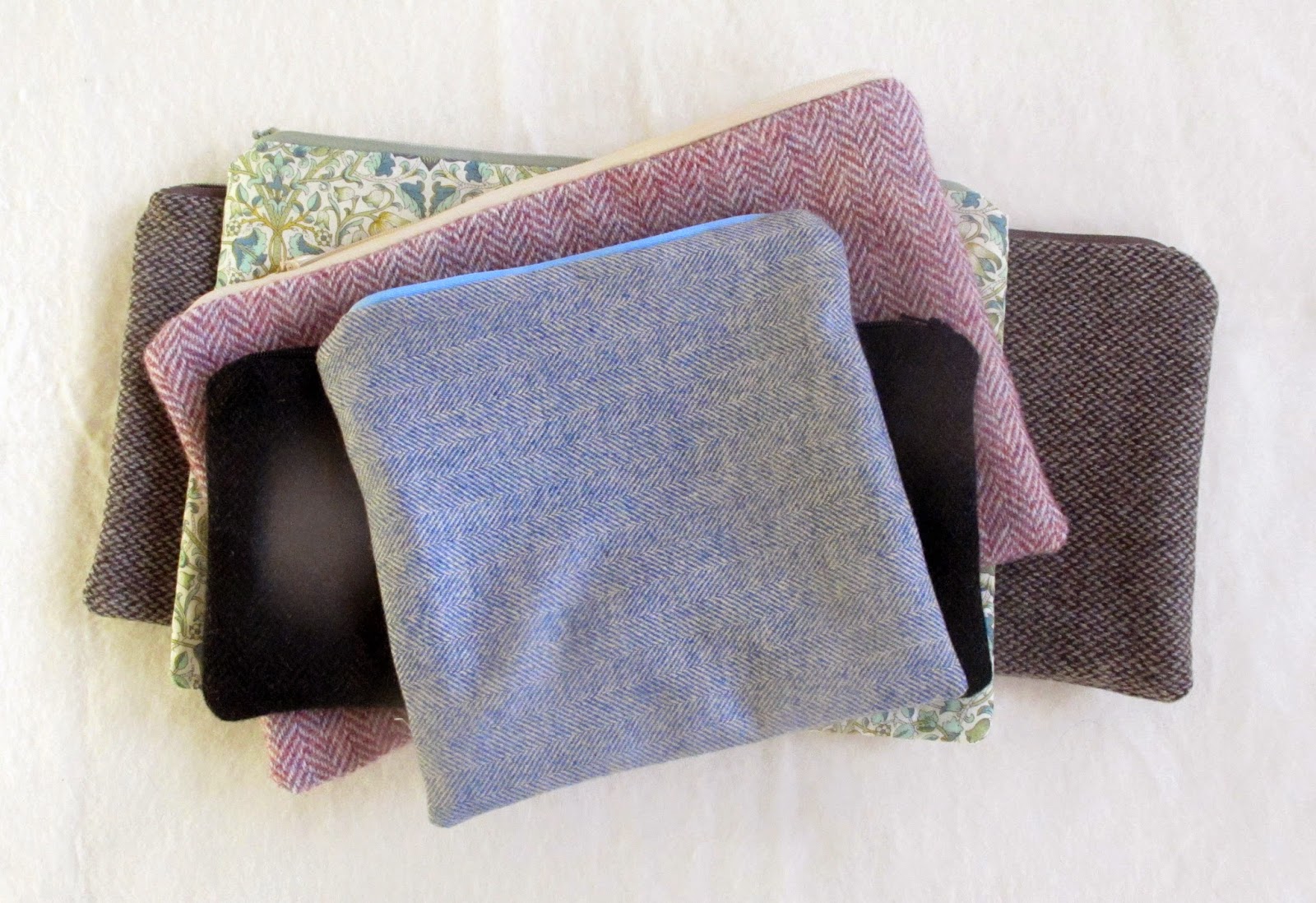 There are so many great tutorials online for how to sew a simple zip pouch, and today I'm going to share a few of my favorite ones with you. Once you get the hang of them, zip pouches are pretty easy and very satisfying to whip up. Sometimes when I'm feeling a little stuck in my studio, I make a bunch of pouches just to get things moving along. If I cut up the fabric assembly line style I can crank out quite a few in a morning or afternoon, and feel like I've accomplished something. They're very handy to have around as last minute gifts. (The pouches pictured here were made with wool remnants I bought on my trip to Cotswold Woolen Weavers back in the fall.) 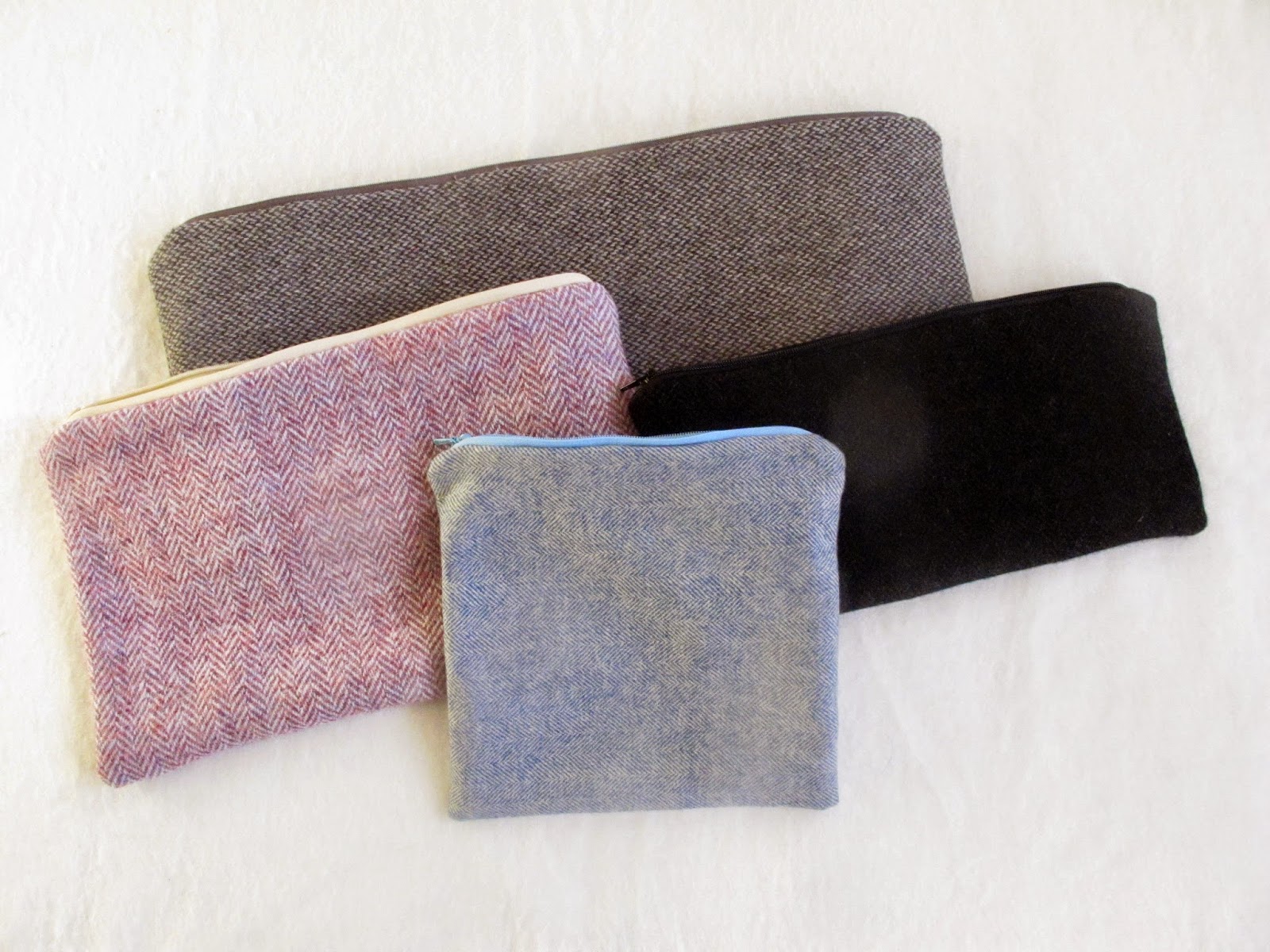 If you've never worked with a zipper before, I have a tutorial on this blog for making a very simple felt zip pouch which is good for beginners because it's unlined and uses felt which doesn't have a right or wrong side. That means you can focus mainly on learning how to sew the zipper in rather than worry about what layer of fabric goes where and which way it faces.

Once you're confident with that process, you can move on to a making a lined zip bag from the always excellent Purl Bee blog. This photo below is a simple lined bag I made using one of my precious Liberty fat quarters. It's lined with a lovely cream raw silk, not pictured. 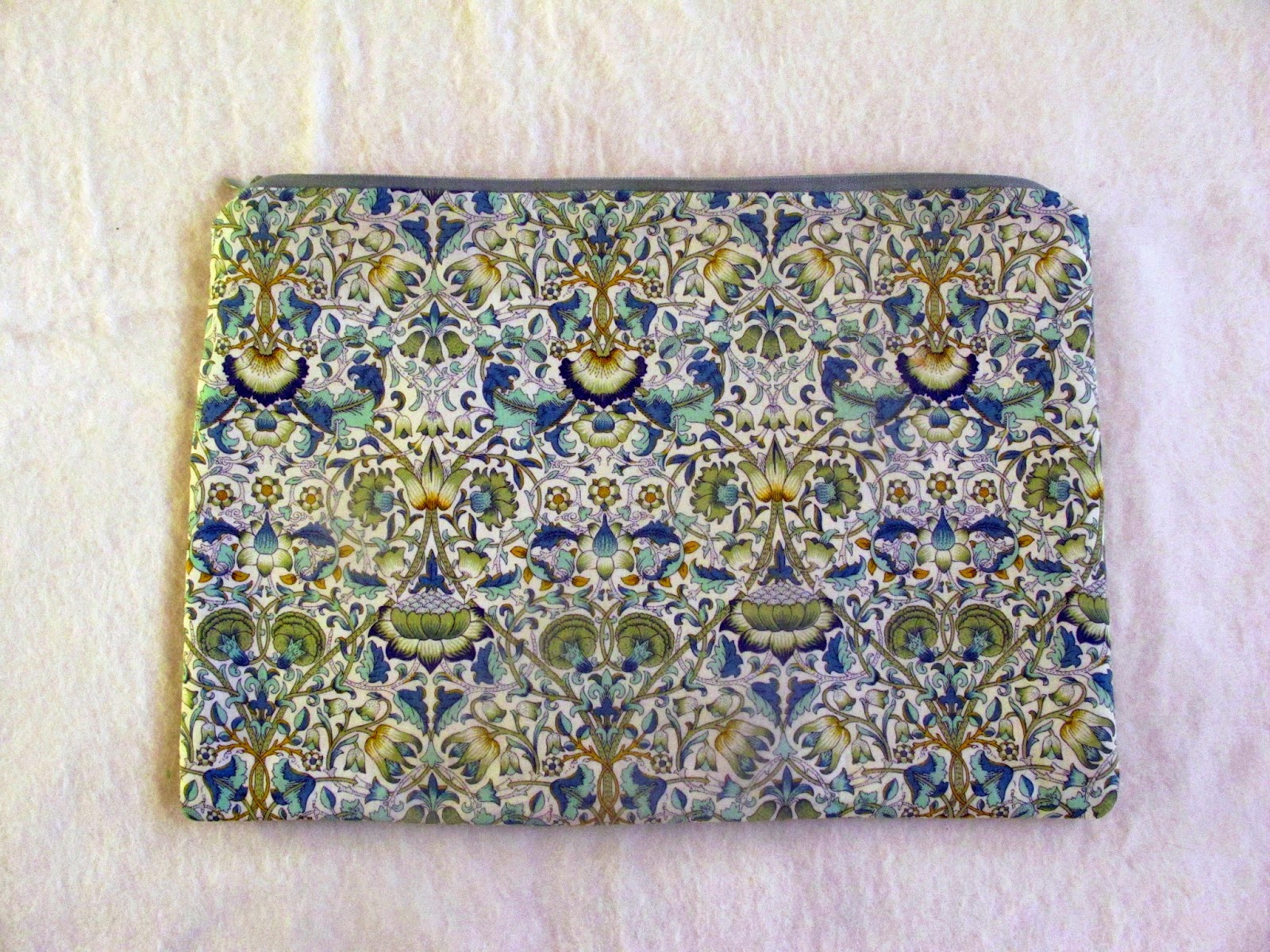 Adding a lining to your zip pouch really bumps things up a notch, as seen below. My advice is to be very careful that lining and outer fabric sizes match perfectly, or else you'll wind up with a rather wrinkly, beginner's looking lining. You can see what I mean in the photo of the blue and white lined pouch two photos down on the right. 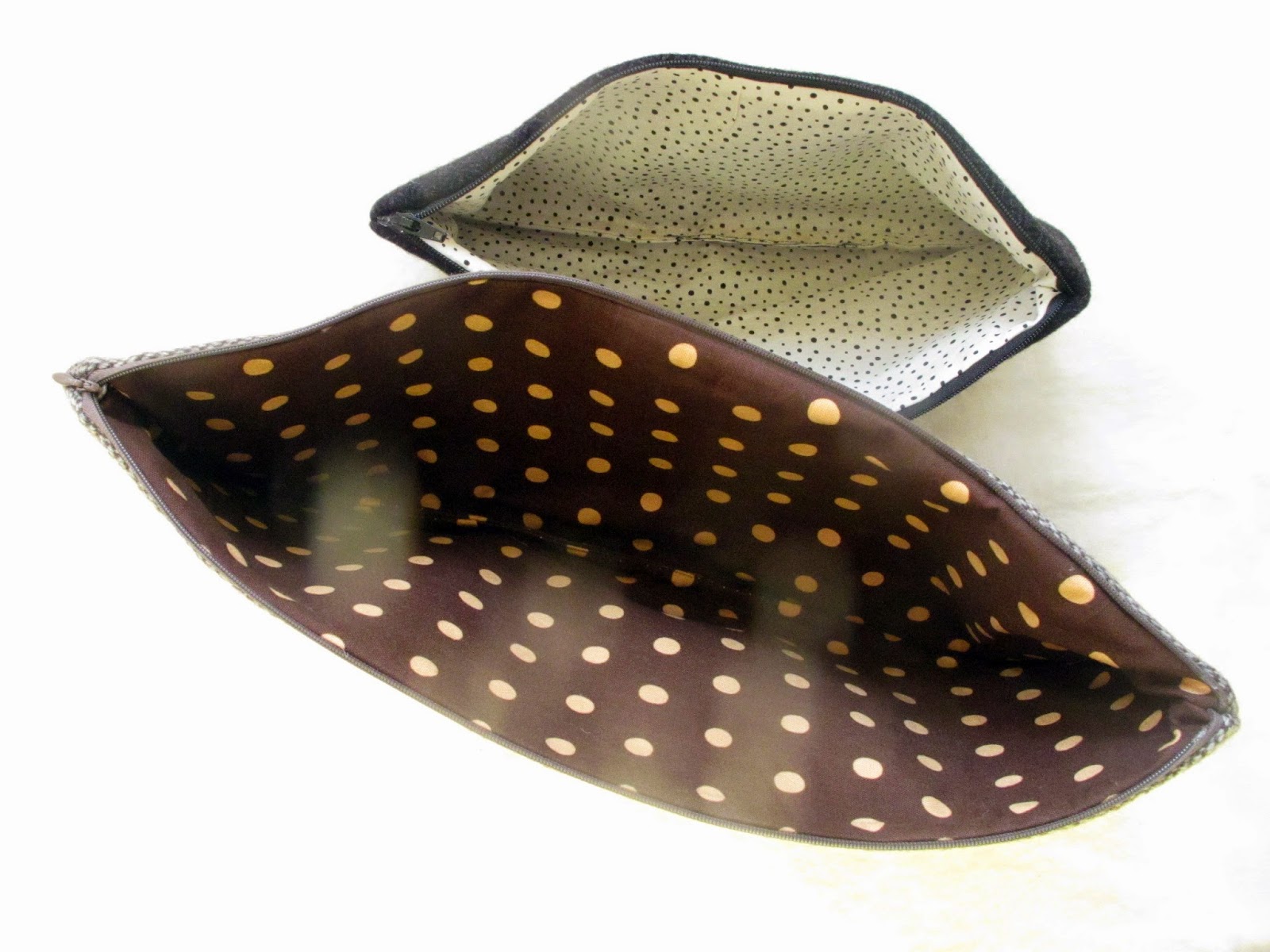 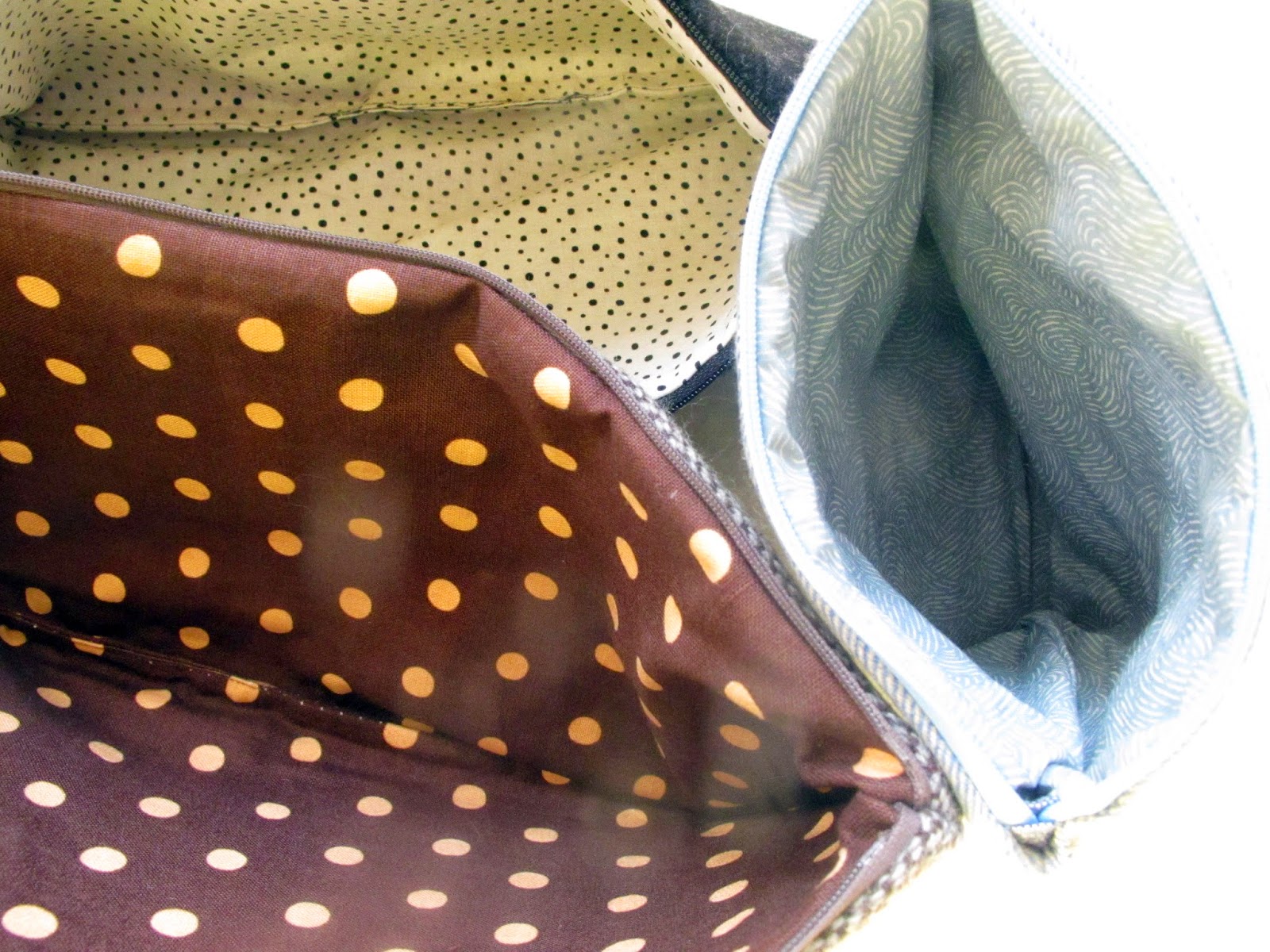 Another very well photographed and clearly written tutorial, which throws a zip cover embellishment into the mix, comes from Flossie Teacakes. This one took me a bit of practice to tackle; it's important to pay attention to the bit at the end of the tutorial about the "zip ends pointing into the lining side and not the outer fabric side"; failure to heed this instruction results in a wonky zipper. 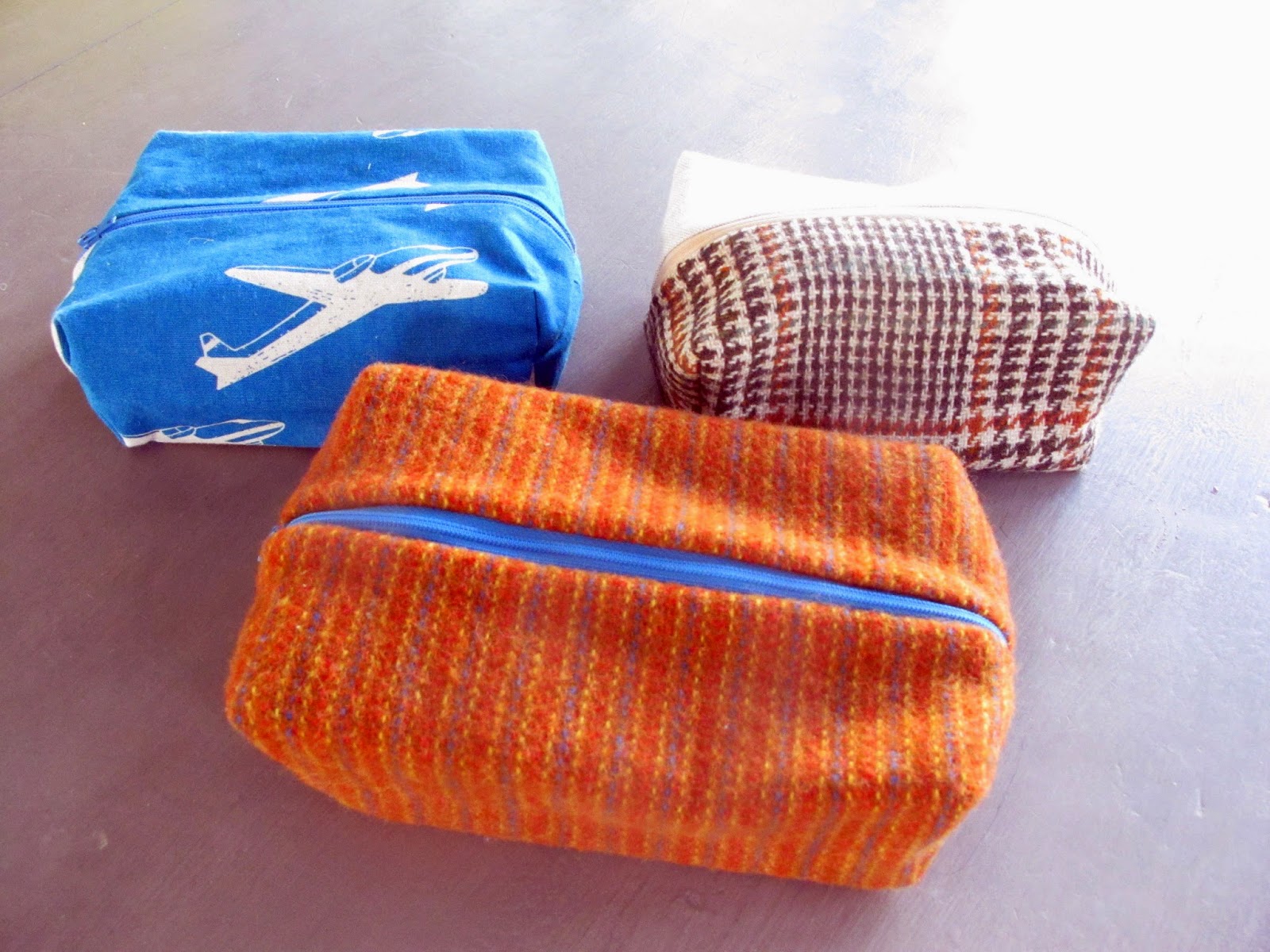 These box zip bags above were the ones I mentioned in an earlier post having made my boys for Christmas. The first one I made was the plaid one on the top right; I botched the placement of the lining and outer fabrics so that half of each were on both the inside and outside. But Michael didn't mind, so I kept it and learned from my mistake and was more successful with subsequent bags. 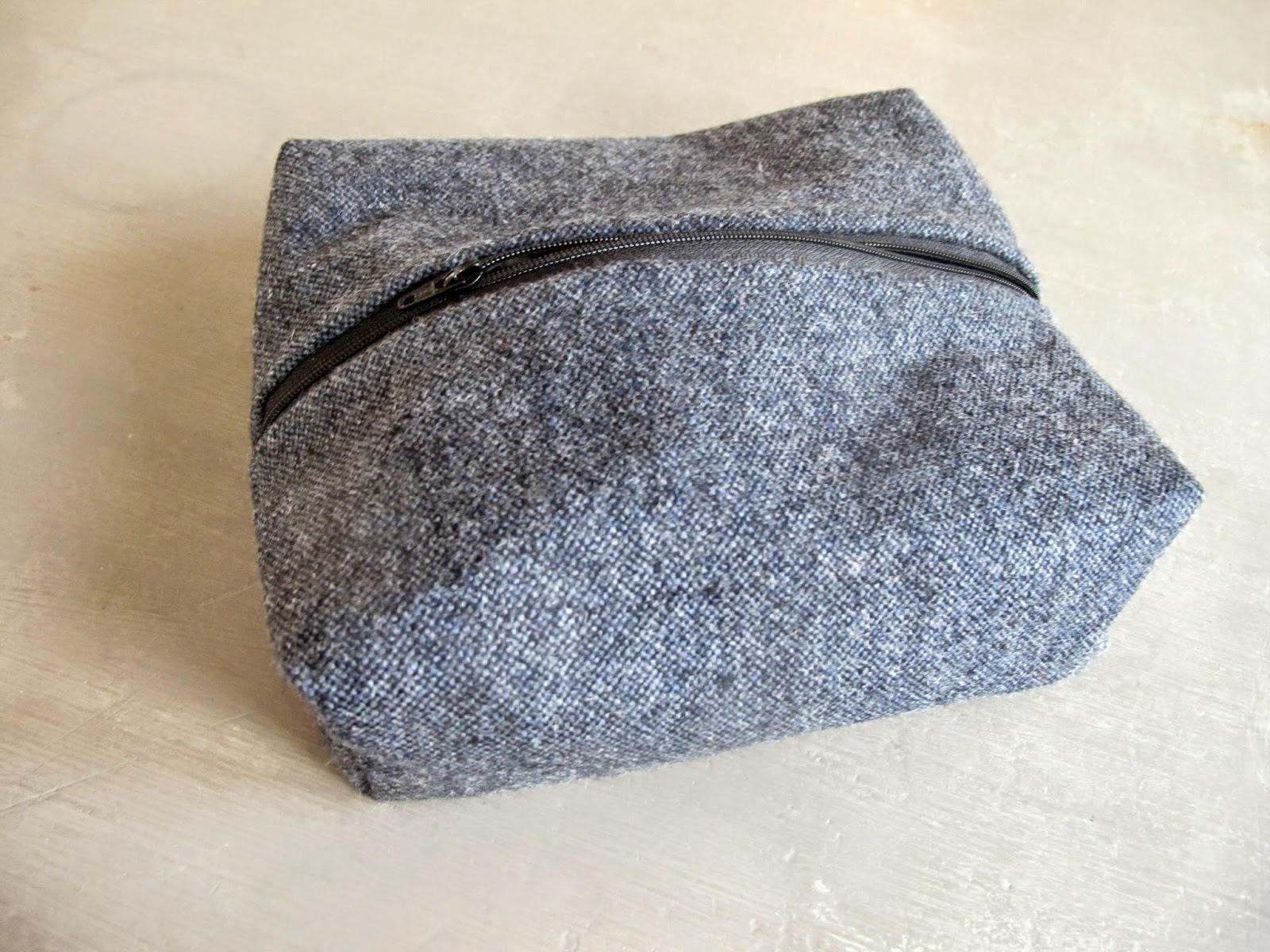 And here is Henry's bag, for which I used this very manly grey tweed. Below you can see a shot of the slightly more whimsical lining I used. These were all made using the box bag tutorial from the Say Yes blog. The only downside of this one was that is doesn't hide the edges on the lining of the bag, though I tidied them up as best I could by trimming the seam allowance with pinking shears. 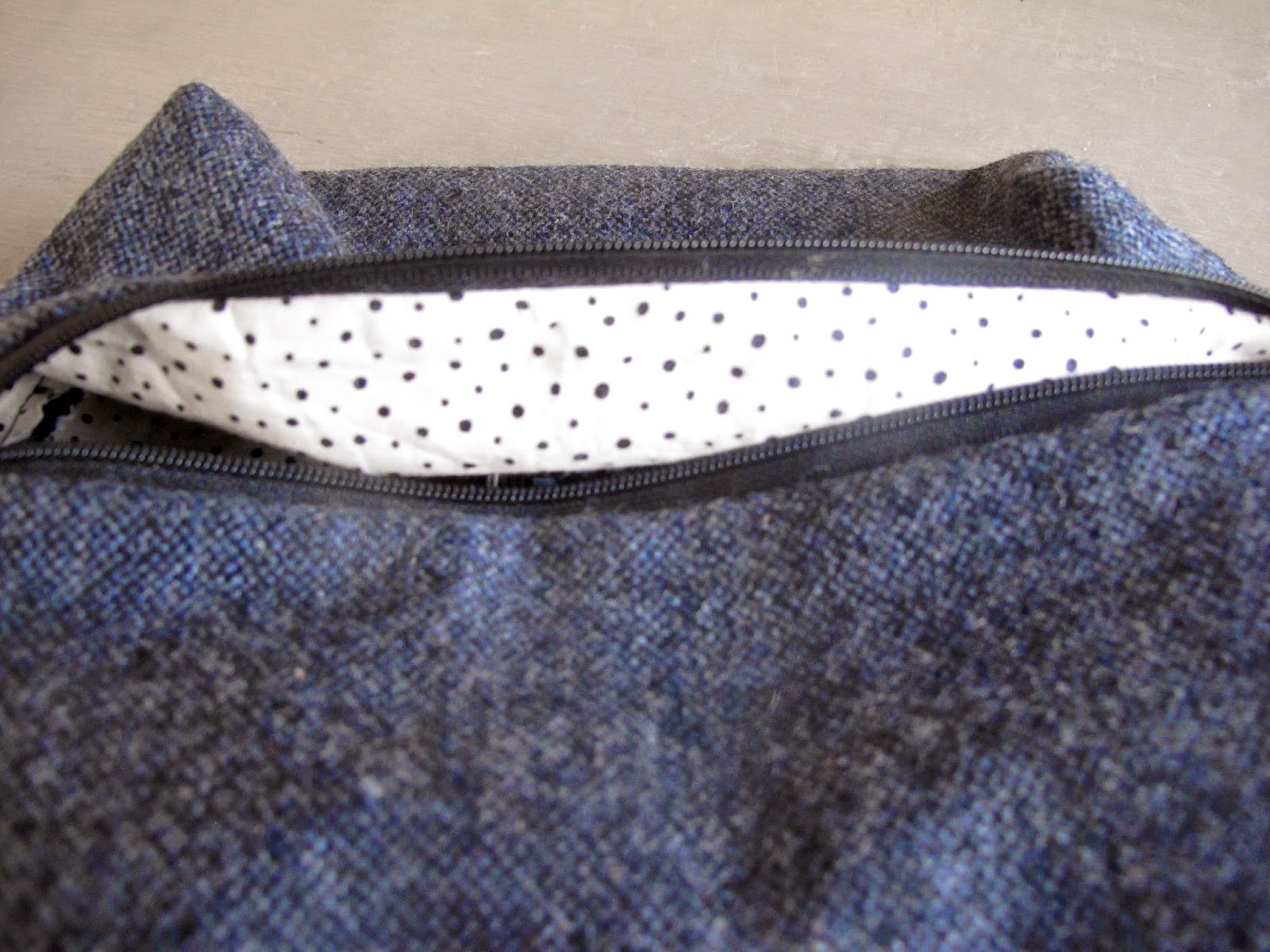 For a tutorial that shows a box bag in which the seams of the lining are hidden in between the layers, you can check out Truly Myrtle's tutorial. This one also includes a handle on the edge of the bag, so is the most advanced of all the ones included here. My eyes started to glaze over a little bit as I scrolled through the instructions; they are clear, there are just a lot of steps.

If you've tried zip pouches using other tutorials not mentioned, or have other useful tips for working with zippers, feel free to share in the comments section below.

When we first moved into this house in the middle of the farm, our plan was to convert a barn across the road into a house in which we'd be living long term. (Turns out, it's not going to happen that way, but we're forming Plan B at the moment.) In the meantime, to make more space for everyone here, we started building sheds in the garden.

The first shed (really more of a summer house-it's pretty big) was here when we moved in, and was quickly claimed as my studio. This is where I can be found spending many of the weekday hours sewing, designing, bird making, starting at walls, etc. Occasionally the boys will come in to spend some creative time with me. I thought about carving out a space for them in here, but instead we're giving them their own space, as you'll see in a moment. 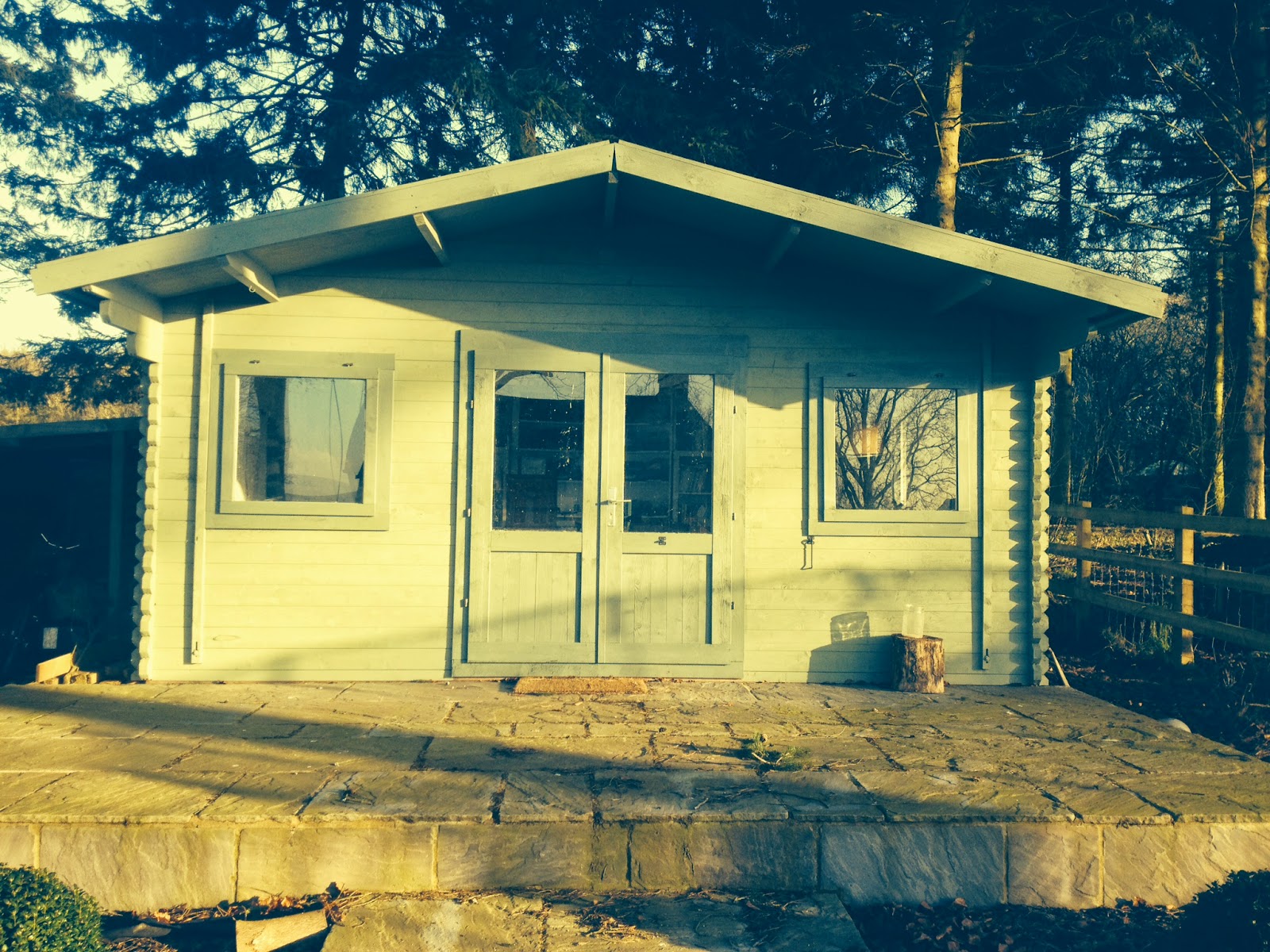 My shed in the morning light. 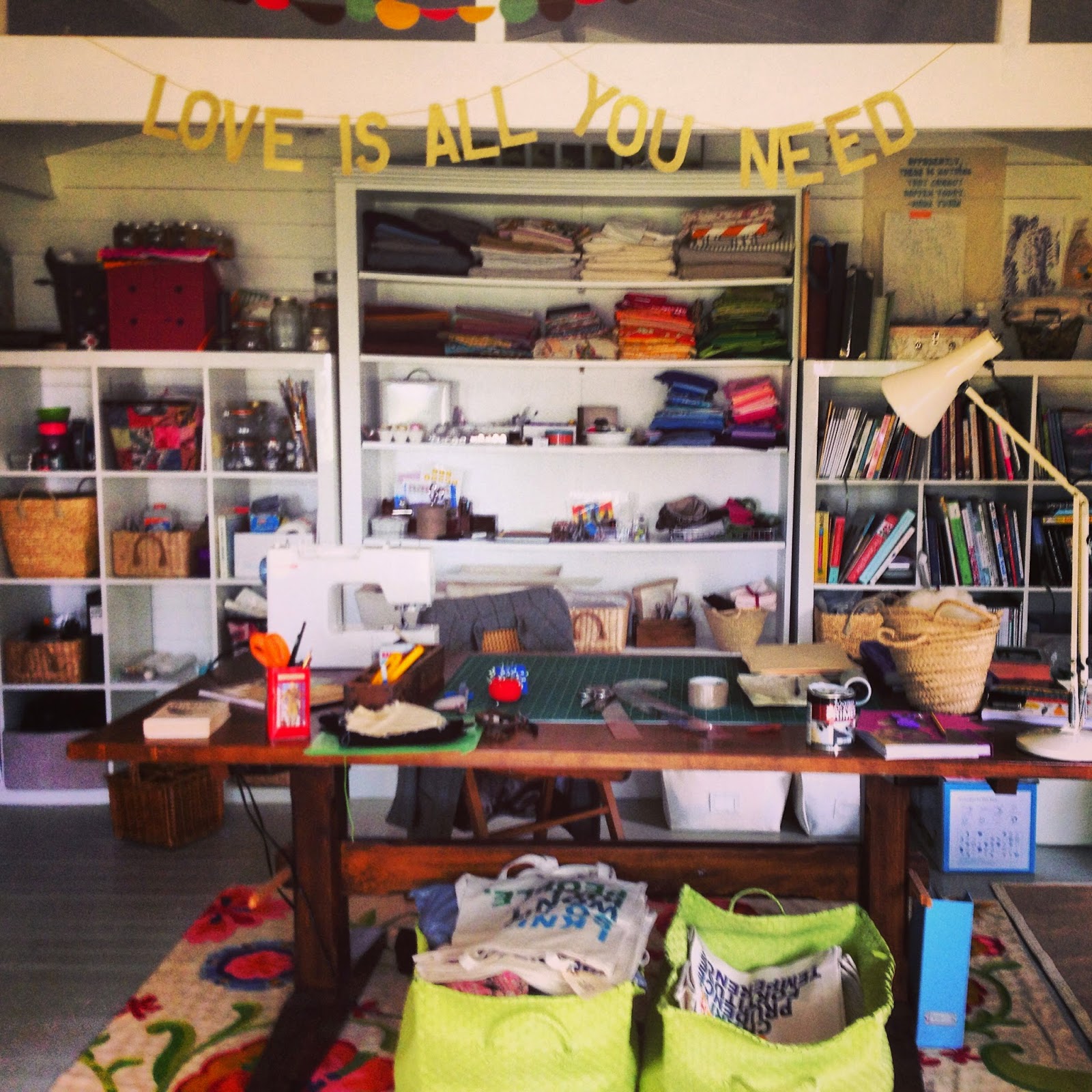 Rarely is it actually this tidy in my studio. 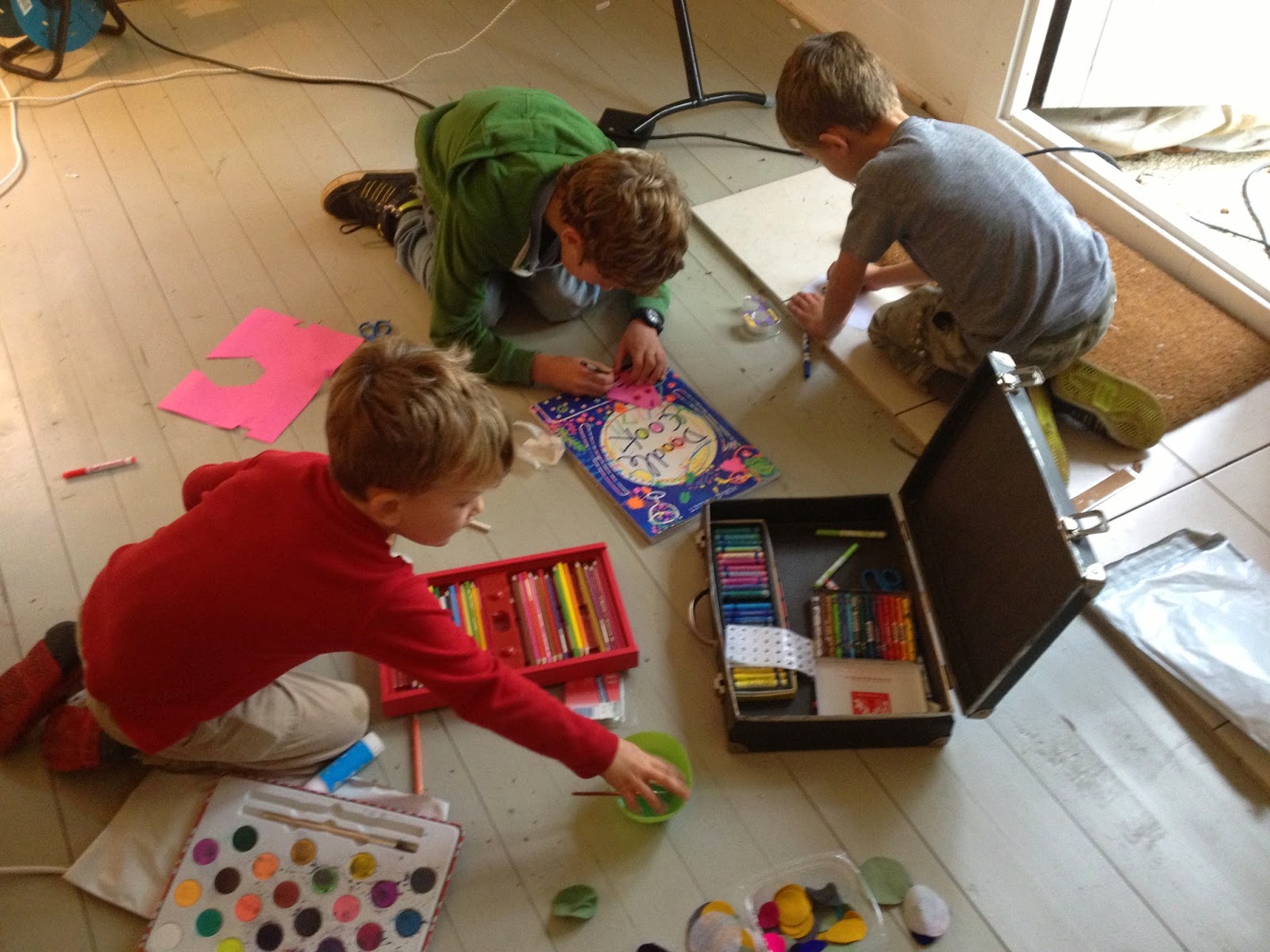 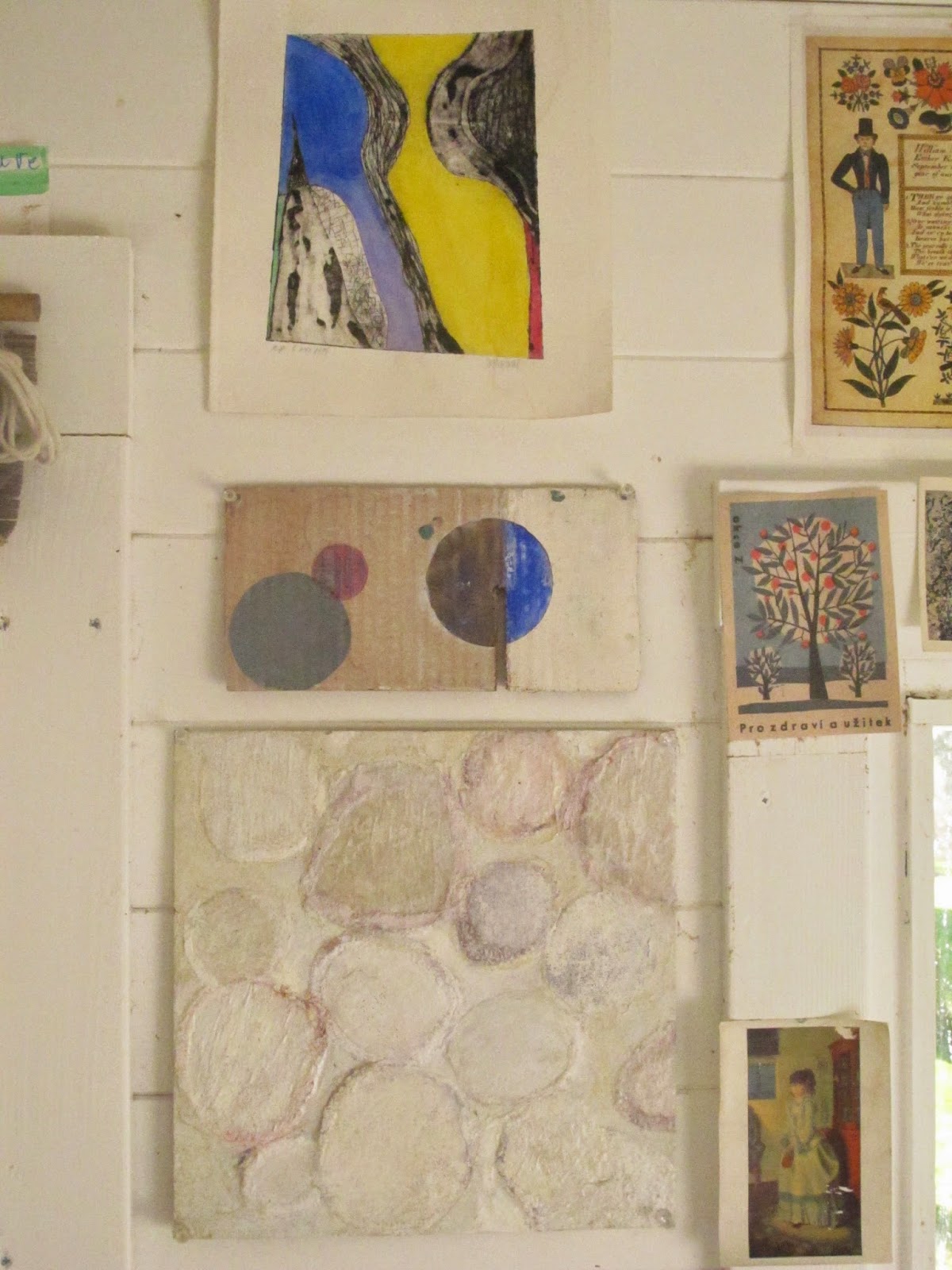 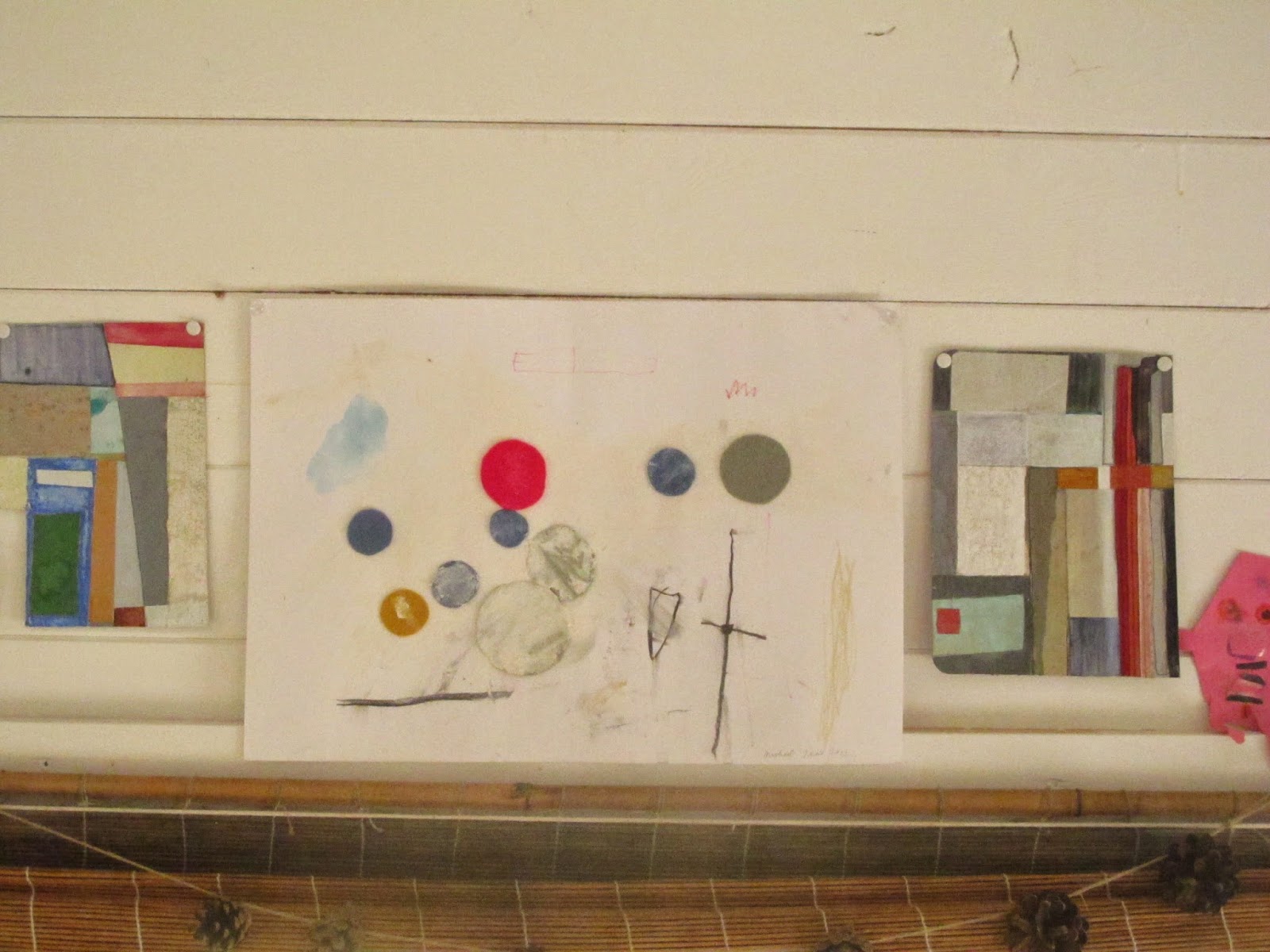 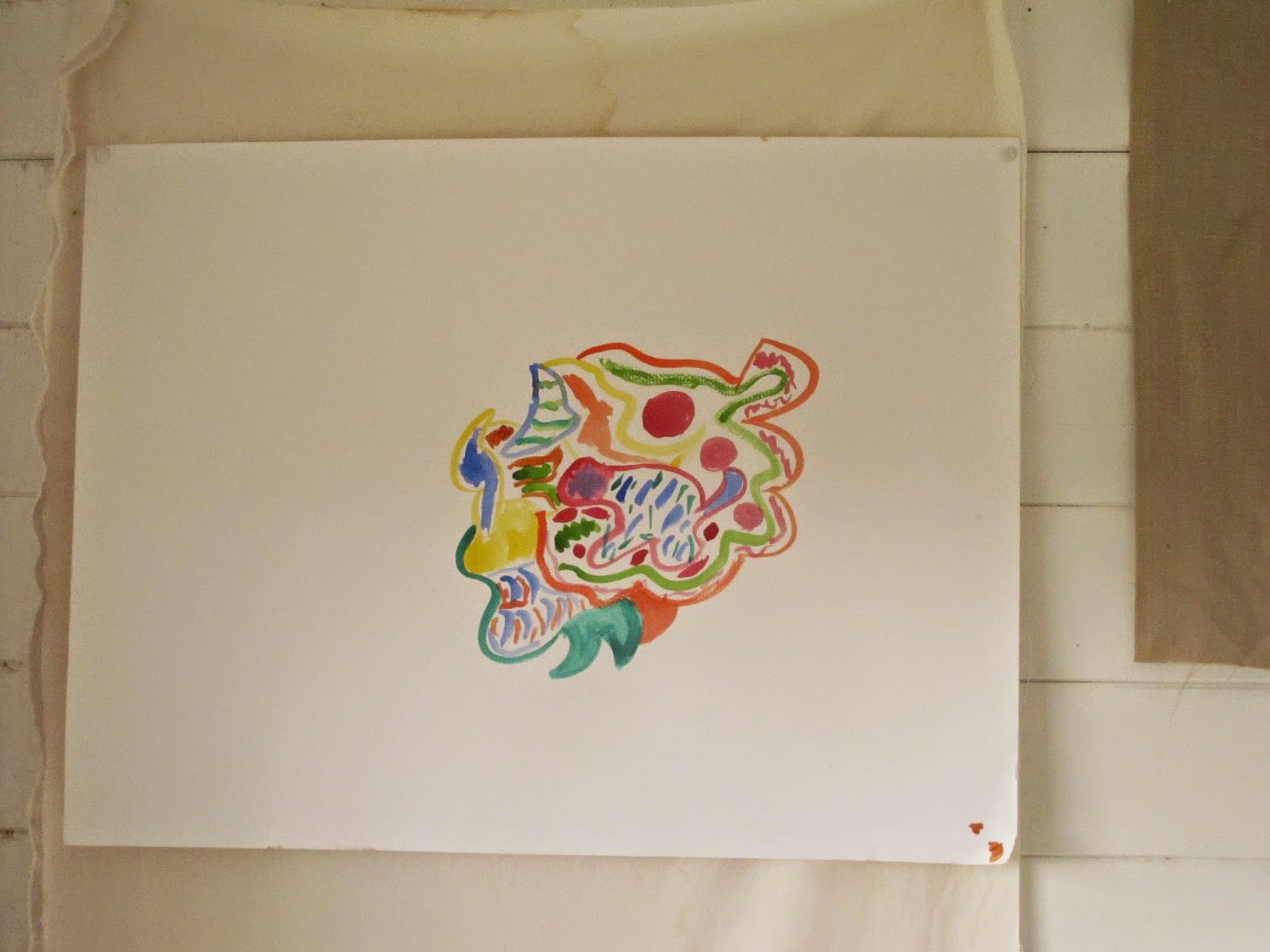 Sometimes the boys keep me company.
My studio walls are covered with artwork; both mine and theirs.

Also here when we moved in was a much smaller garden shed, which was useful but falling apart, so we had it rebuilt. It's where you'll find tins of house paint, tools, chicken and rabbit food, plant bulbs, and probably a lot of stuff that should get chucked. Remind me to go in there in the spring and have a good clean out. 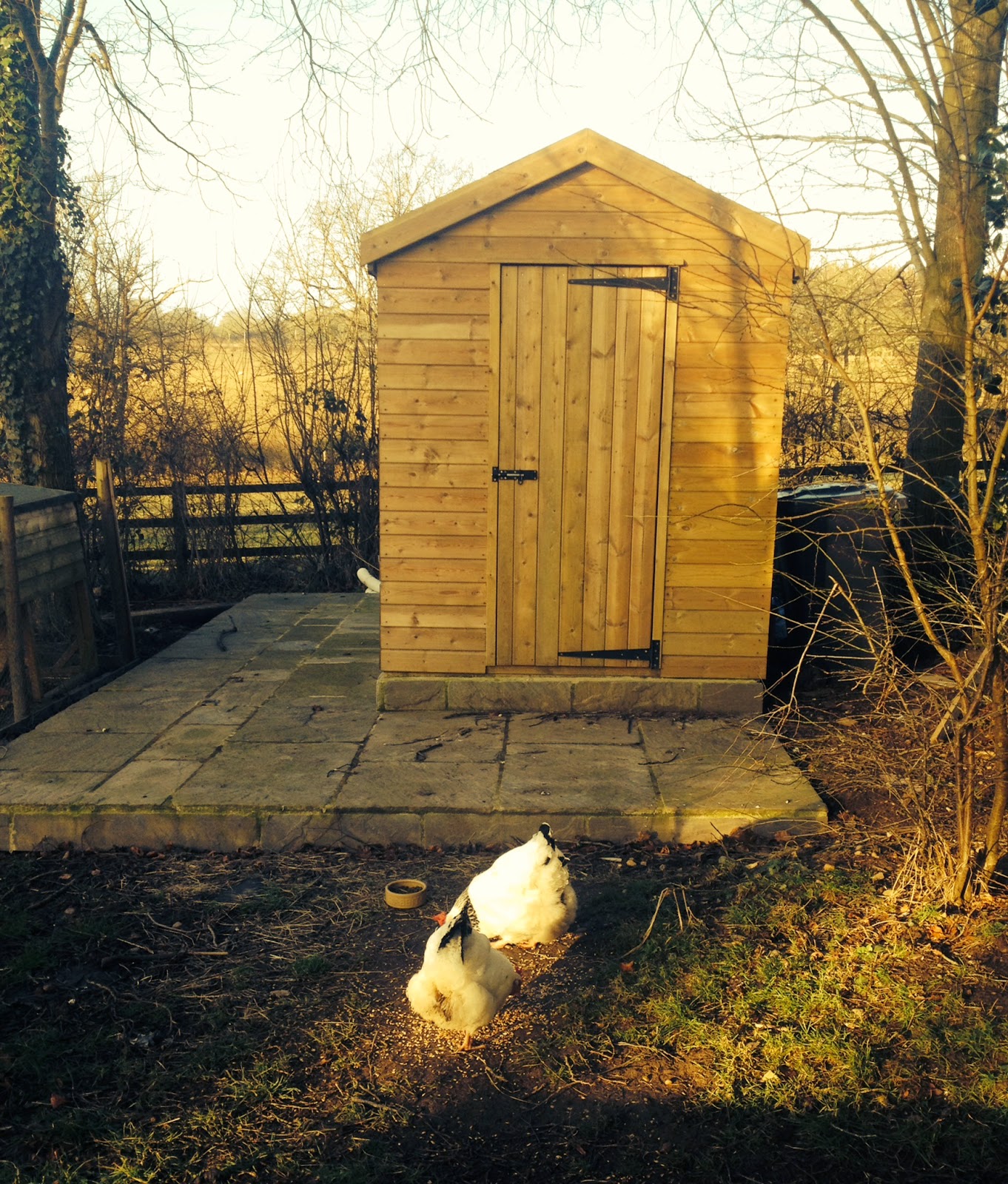 Then Henry decided he wanted a mannex for himself, where he could work on putting together the 1953 Sunbeam motor bike he's building from parts, build his beehives and store his apiarist's supplies, and where he could skin/pluck and otherwise prepare the game animals we eat. (We've been having a lot of venison stew lately, and I think we've decided not to buy beef at all anymore.) 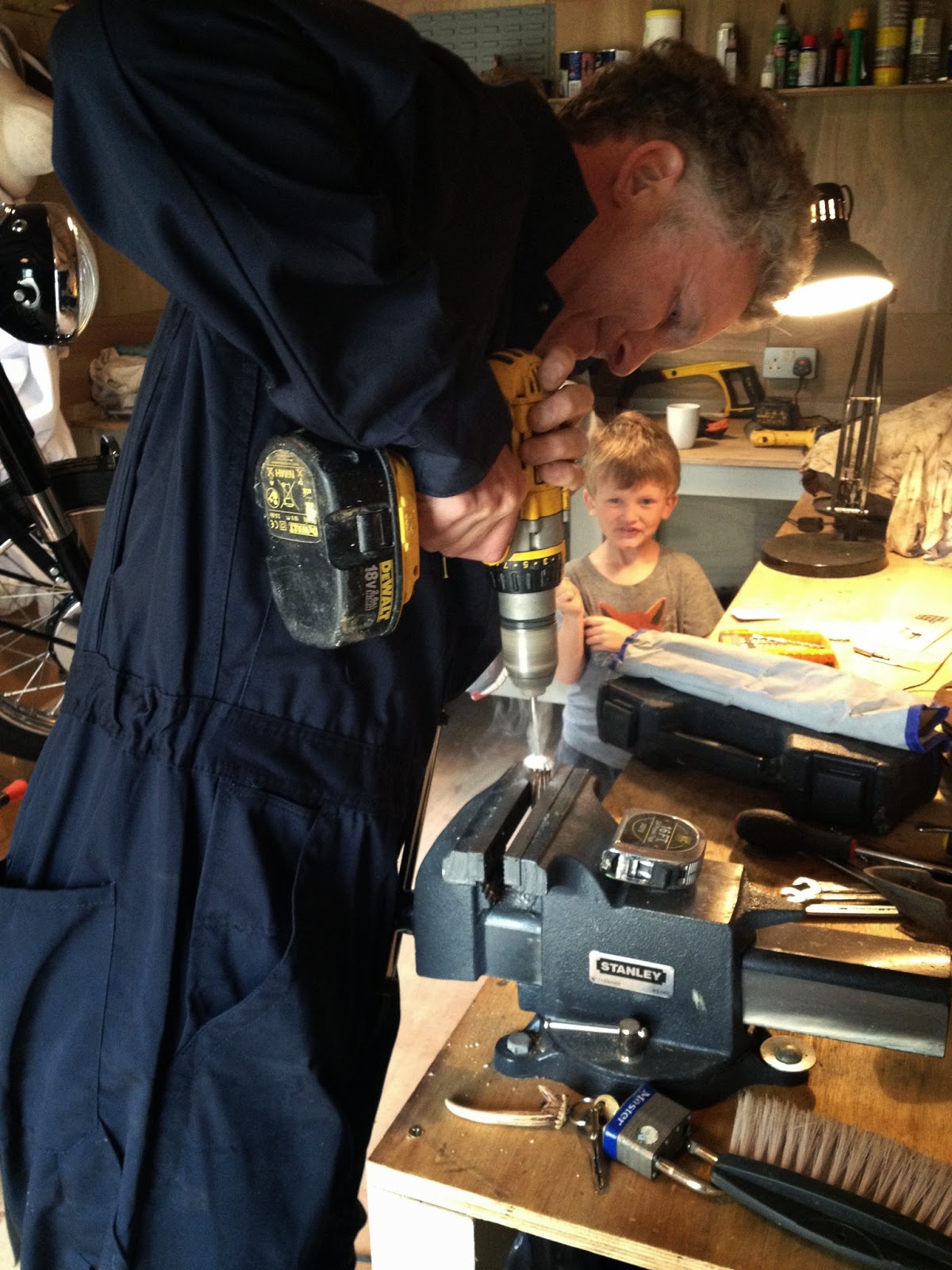 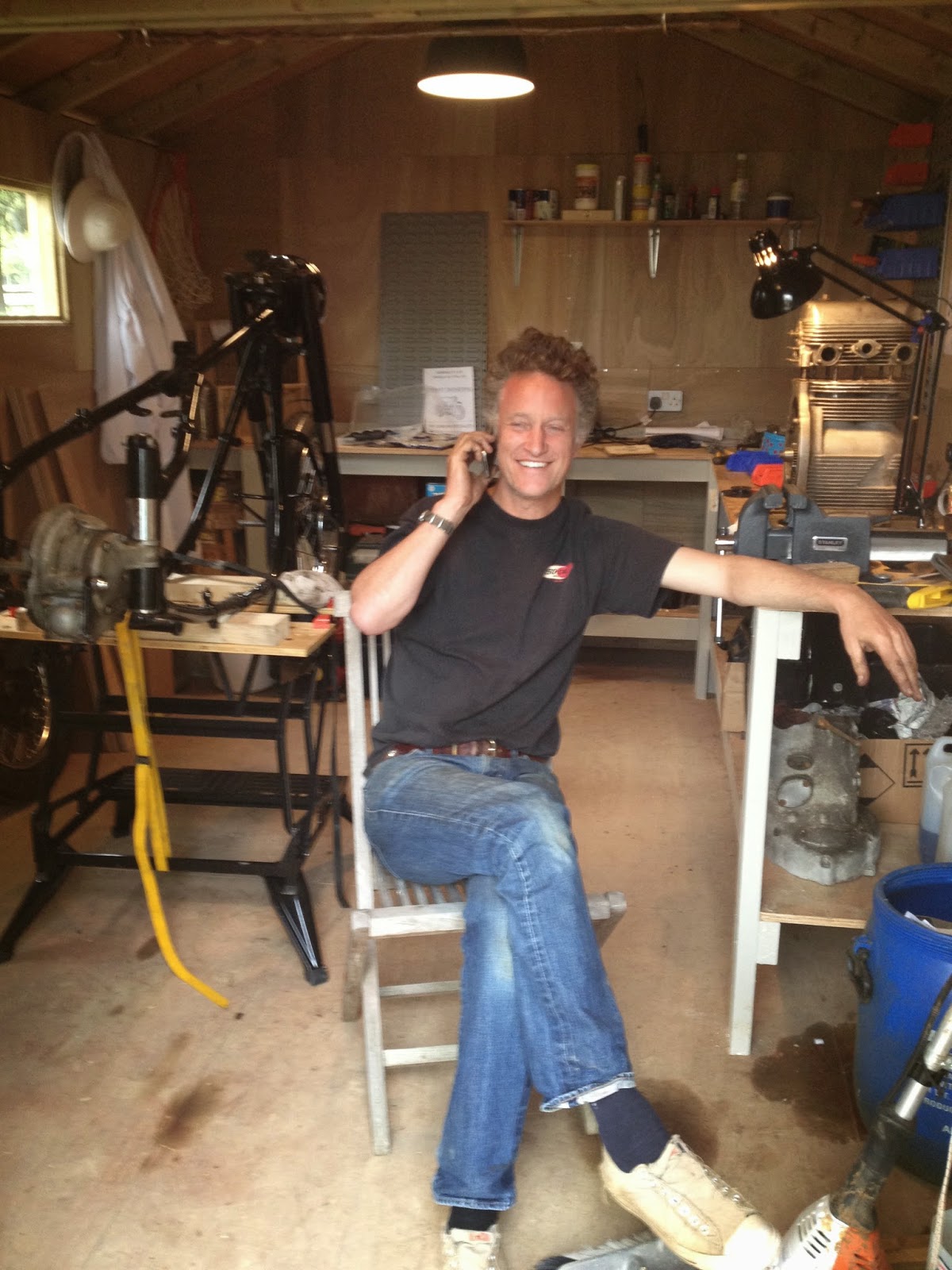 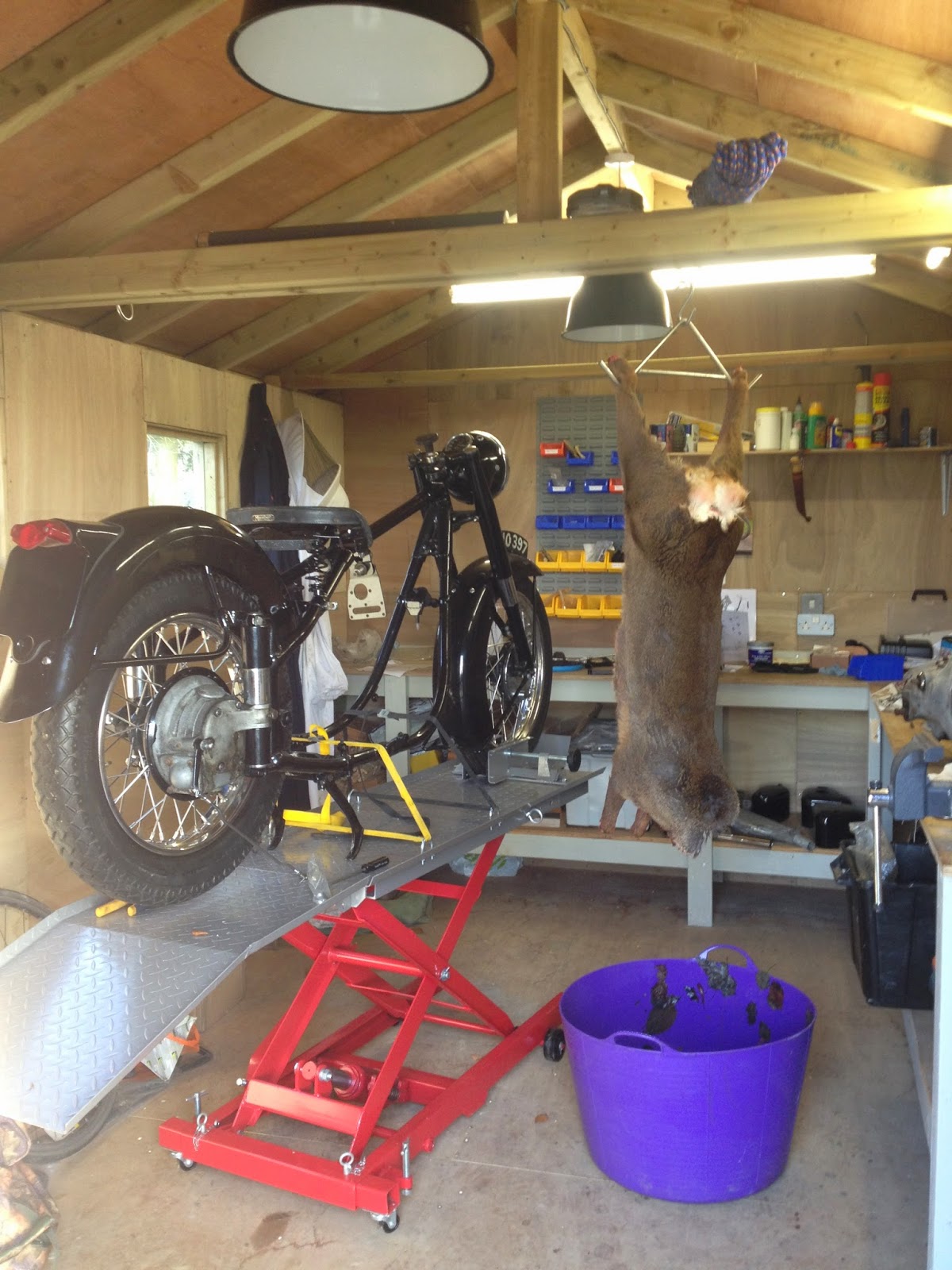 Finally, we wanted a place for the boys to do what they need to do, too. In the barn across the street we keep Jake's drum kit, but its a little dark and creepy on one's own over there, and we reckon he and Charlie would practice a lot more regularly if we moved it closer to the house. We also plan on putting in an art studio for them (meaning shelving with art supplies and a table to work on), and eventually a tool bench with some tools for them to start making whatever it is boys their age need to make. 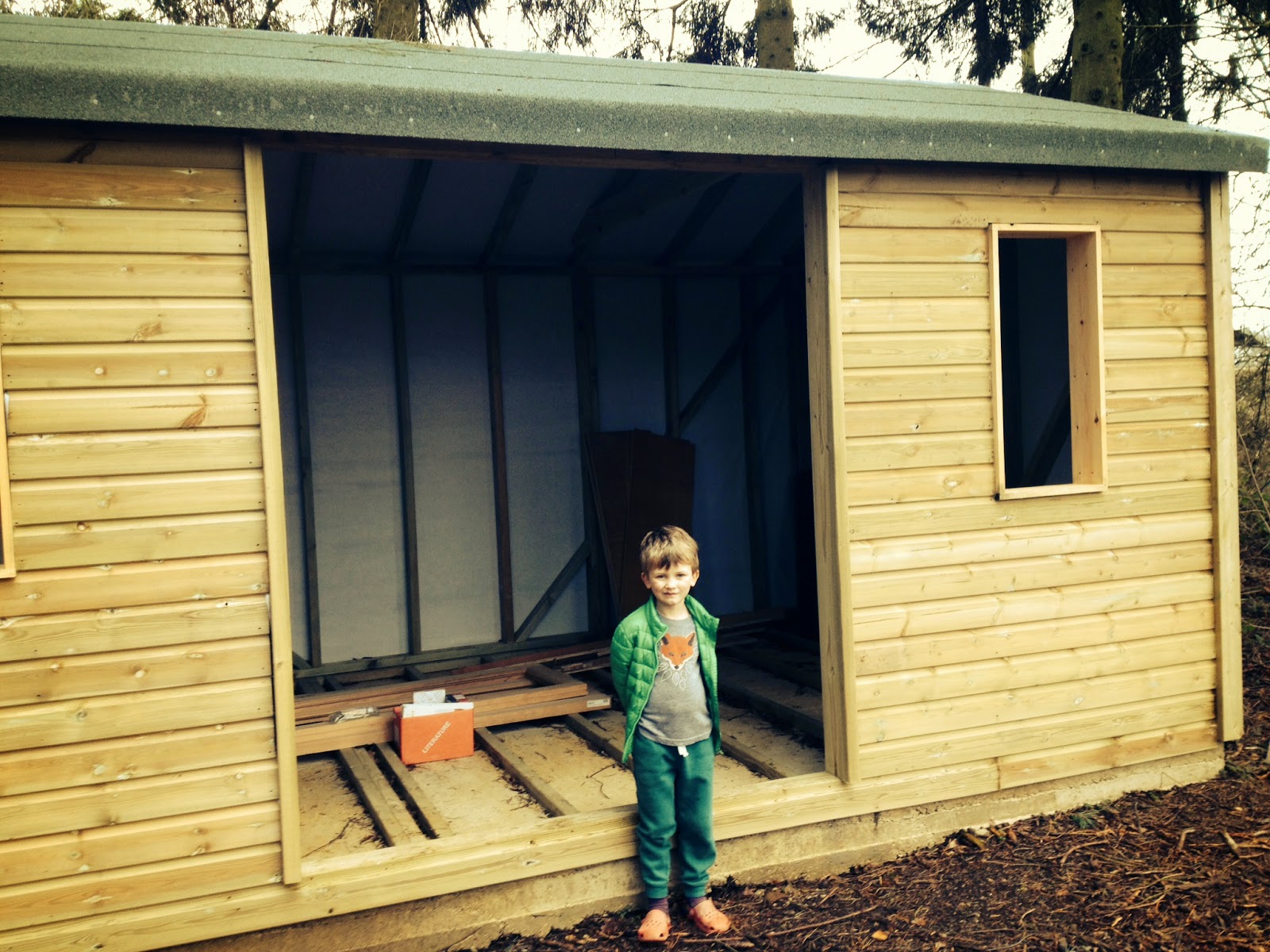 Michael has plans for what will go where in the boys' shed. 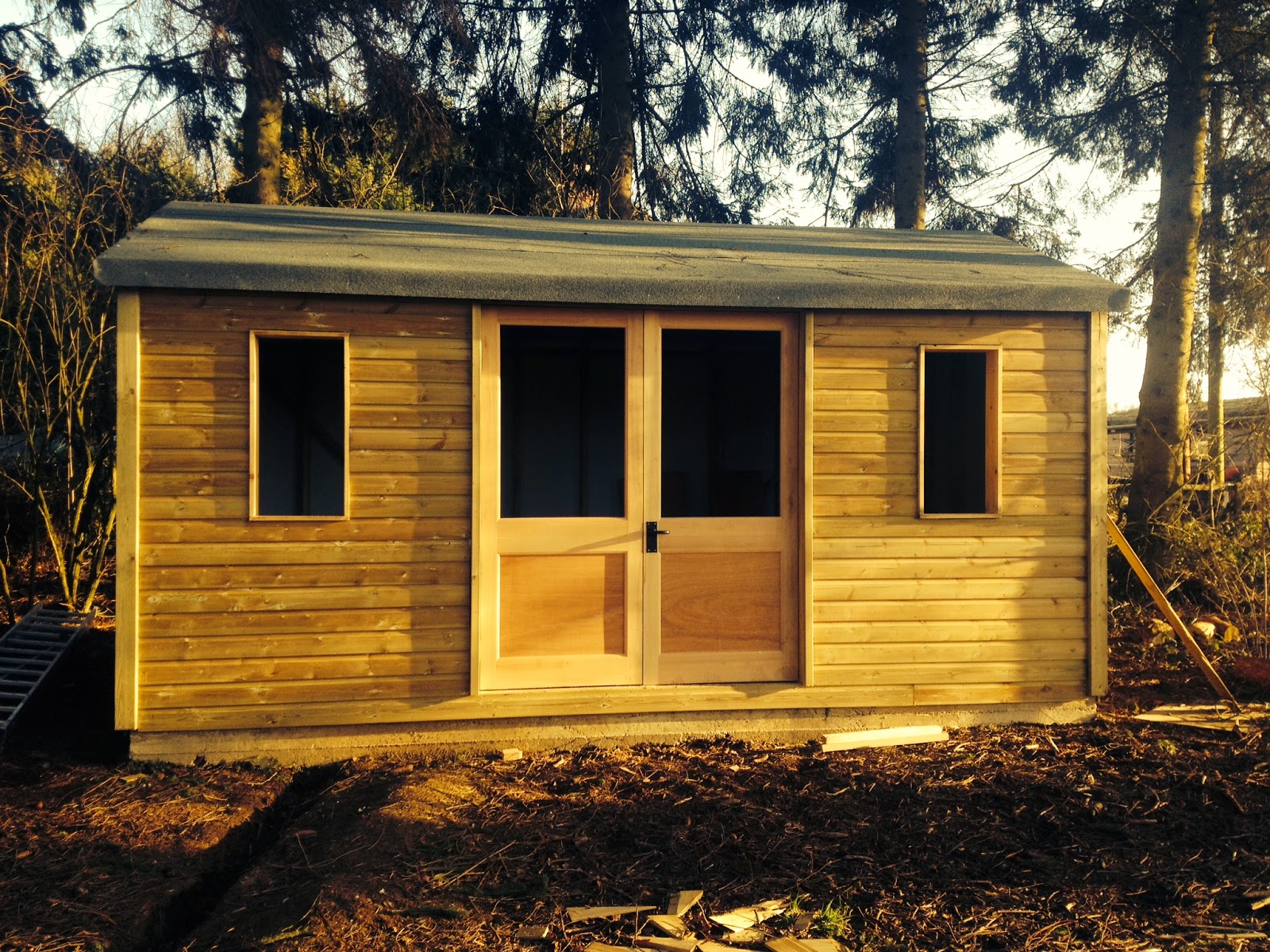 The doors are on, but we still need insulation and electricity for the boys' shed.

We've taken quite a lot of ribbing from friends and family around here about the proliferation of our sheds. Apparently some people find them an eyesore. We're not too bothered by all of that, though I think the boys' studio will be the last one. Next the focus will shift to finishing the tree house that Henry and the boys started building last spring. That's another post altogether.