Following my last post, on the fruits of our farmyard labor, is the conclusion of that same subject. 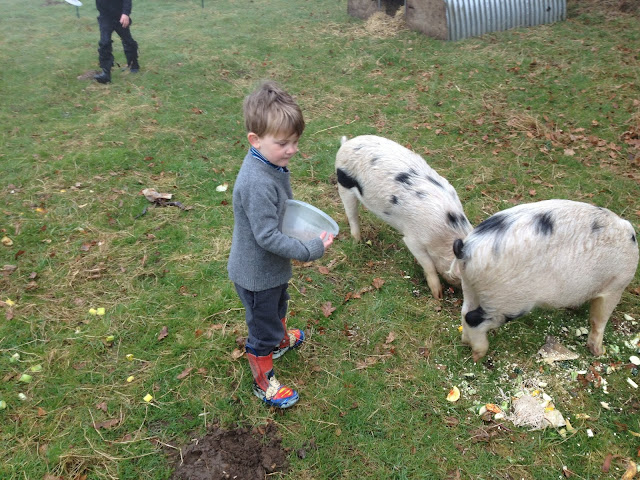 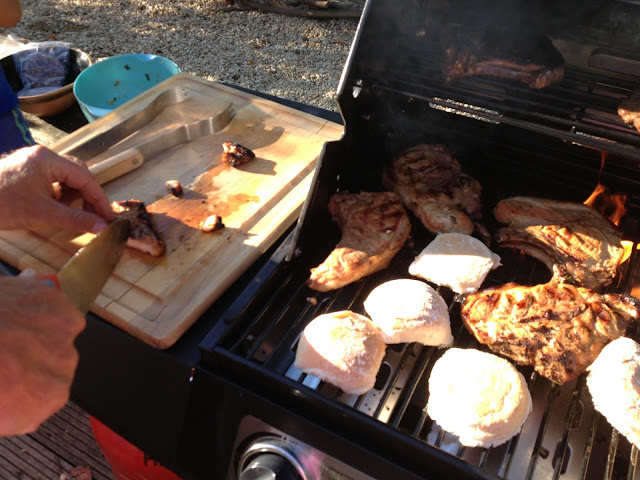 Last spring we bought two pigs, Gloucester old spots which Henry jokingly referred to as Crack and Ling. We explained to our boys at the outset that these animals were for eating, a fact which they seemed oddly unphased by. We never treated them as pets, and when the time came for one of them to go "to market", there were no tears. However a few weeks ago when we had pork chops for supper, Michael met the news that the meat came from our own pig with a very grown up "You're kidding, right?" But he ate it right up.

The meat tasted amazing, and was eaten with more thoughtfulness and appreciation than I typically tend to give my food. I thought about the good life our pig enjoyed; the open, sunny (sometimes) space, the daily food scraps from our table supplemented with organic feed, and the fresh country air. I thought about what she contributed to us not just in terms of bacon, but how she composted our scraps and fertilized our field to prepare it for planting potatoes next spring. I am a little late to the party in finally reading Michael Pollen's excellent book "The Omnivore's Dilemma", but he describes it this way:


In fact, when animals live on farms the very idea of waste ceases to exist; what you have instead is a closed ecological loop-what in retrospect you might call a solution. 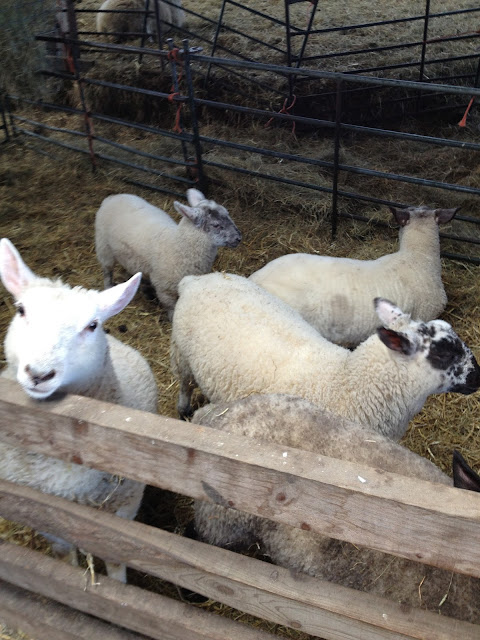 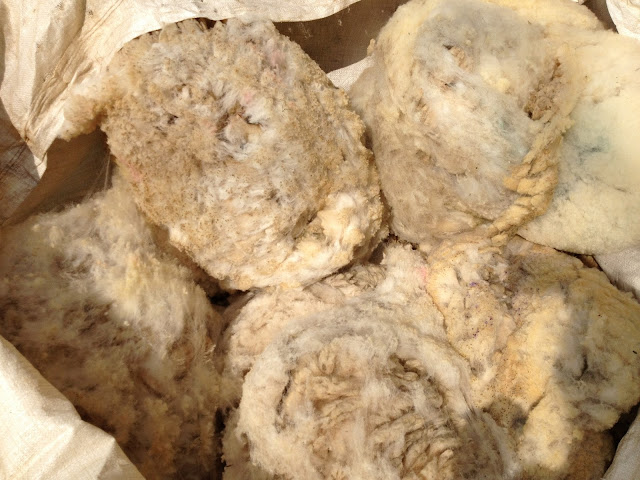 Some of you may remember that back in March I adopted two lambs. Unlike the pigs, these two were treated like babies, bottle fed, cuddled and coddled and given names. Though right now they are about ready to eat, I just can't quite surrender them to the butcher, and neither can my boys. Johnny and Violet will remain pets, but they will earn their keep with annual wool contributions. And sheep, like all ruminants (animals whose amazing stomachs can convert plant matter to protein), are also really great at burying seeds into the ground with their hooves, fertilizing the ground with their, well, fertilizer, and generally keeping our field in great shape.

The fleece in the photo above were given to me by our friend and neighbor Kitty, who has about eighty of her own sheep. Though she sells her wool, she kindly set aside a few fleece for me when she heard that I was interested in learning how to spin it. (I still haven't taken my wheel out of the box, but its high up on my to do list.) 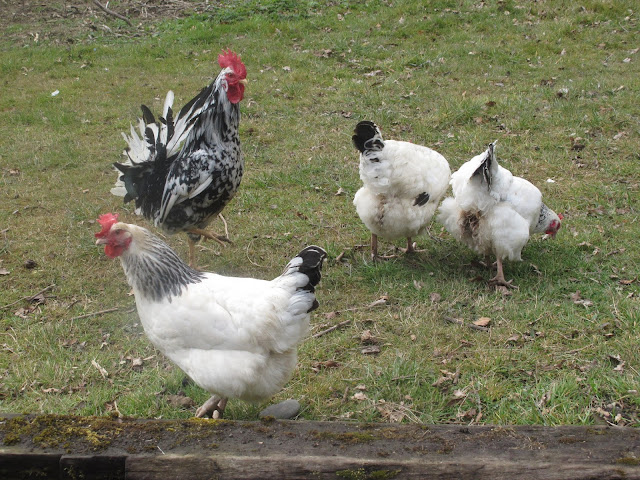 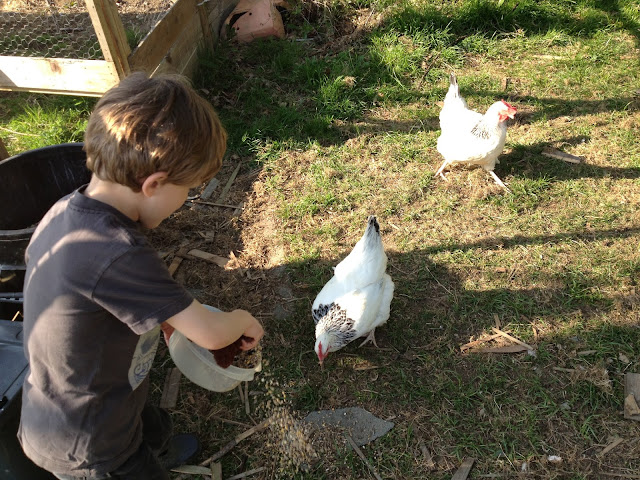 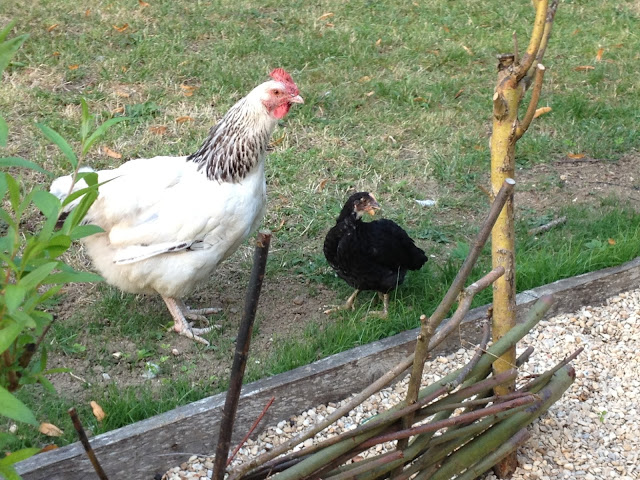 The chickens have been a mixed bag. I mean, thank you sooo much for all those eggs, ladies. Seriously, I appreciate them. But my chickens are seriously aloof. I was hoping for the kind of chickens I could pick up and stroke, chickens who would run to rather than from me when I came outside. These are not those. Then there is rooster. I'm not a fan.(Though I did find it hysterical when he went through a brief period wherein he tried to attack Henry, and I don't particularly mind all the cock-a-doodle-dooing.) But we wanted chicks. I wanted my kids to see the miracle of the baby birds breaking through the eggs, and for them to be able to hold the sweet fluffy little things in their hands. But when one hen finally went broody, she decided to go rogue and sit on her eggs out in the field somewhere. (What? My chicken house not good enough for you?) She was eaten by a fox. But then a second hen went broody on a huge clutch of eight or nine eggs, hatched a mere two of them the day we went to France for summer vacation, and managed to have two cockerels. Thanks, lady.

Tomorrow we're going to the Moreton Show, which is a huge agricultural fair. Stay tuned for a post on some new chickens. And perhaps a recipe for chicken soup.

PART IV: THE EARTH
Still with me?
Okay, the garden. I'll keep this bit brief.
Before: 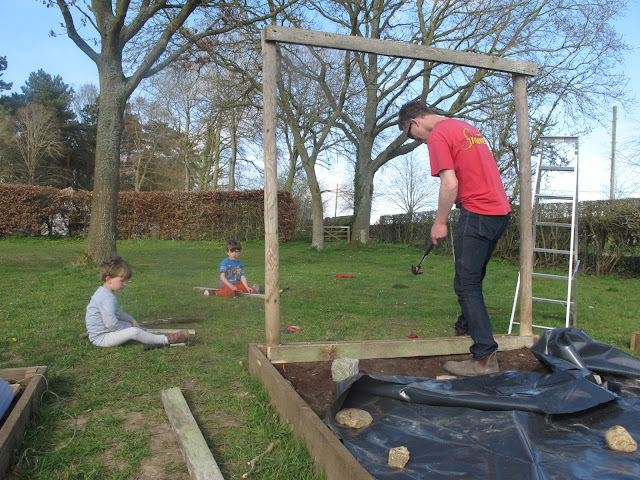 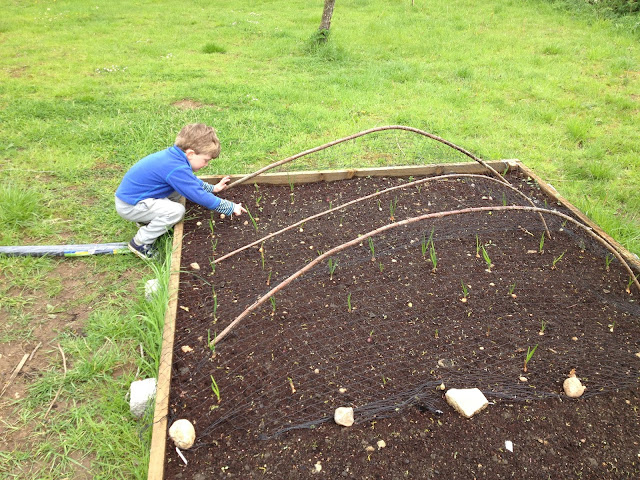 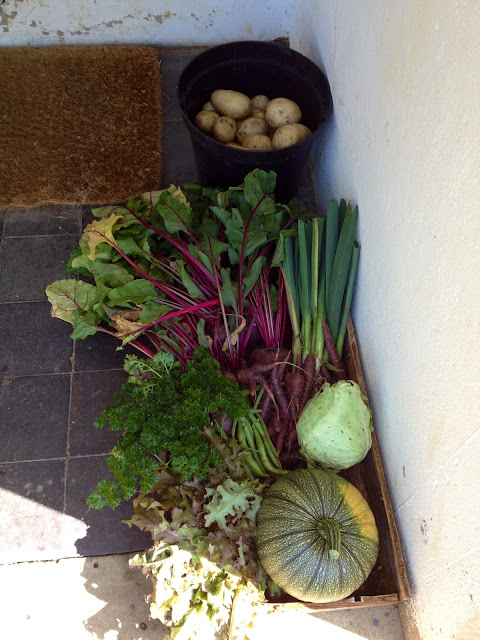 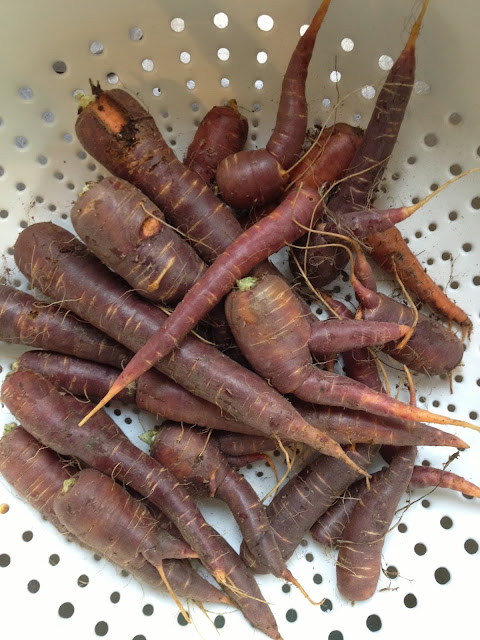 We ate all of those carrots in pretty short order, but we have a bumper crop of beets and more lettuce than we could eat. We juiced some of our kale, which was pretty tough and fiber-y, and had some delicious green beans. We missed out on most of our purple broccoli because we went to France as it was ready to eat, so we gave it to Tom who helps us with the gardening on Saturdays.

We're still a long way from total self sufficiency here, but we're taking steps in that direction. Maybe we'll never get there completely, but that's okay. We're enjoying our efforts all the same.
Posted by Leslie Astor at 5:03 AM