Canning Is Not My Strong Suit 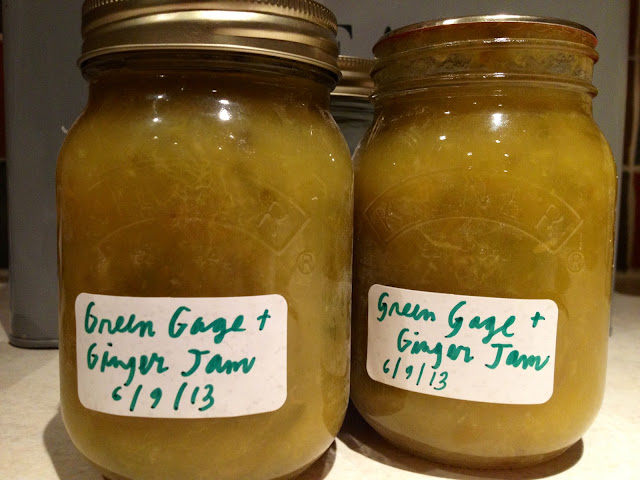 In an effort to build up our winter stores with locally grown, seasonal produce that I'm trying not to buy out of season anymore, I've started canning. As Alana Chernila writes in my new favorite book, The Homemade Pantry: 101 Foods You Can Stop Buying and Start Making: "Like so many other useful skills, canning was once just something that people knew how to do...It wasn't so much a craft or a choice-was simply necessary". Its meant to be pretty simple. And yet I find that, like baking, I just can't seem to get the hang of it. 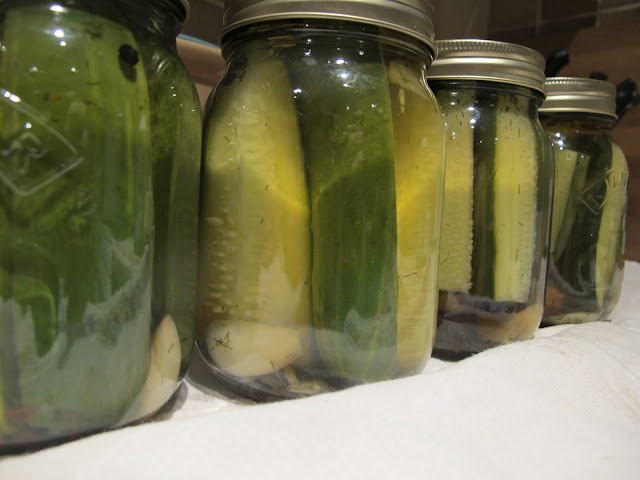 Don't these pickles look amazing? I spent a decade living in Brooklyn, so I think I assumed that artisanal pickle making would be second nature to me. I was so wrong. Though I followed the recipe to the letter (sort of; I couldn't find the cucumbers suggested in the book, and was warned against substitutions) something went wrong. One setback was in my water bath, wherein only one of my jars sealed properly. The rest I put into the refrigerator, with plans to eat them in the coming weeks. My kids love pickles, so I think this shouldn't be a problem. After a week of letting them cure, I opened a jar, tasted one pickle, then pulled the rest out and put them in the pig food bucket. They were not delicious, but rather tasted of bad vinegar. 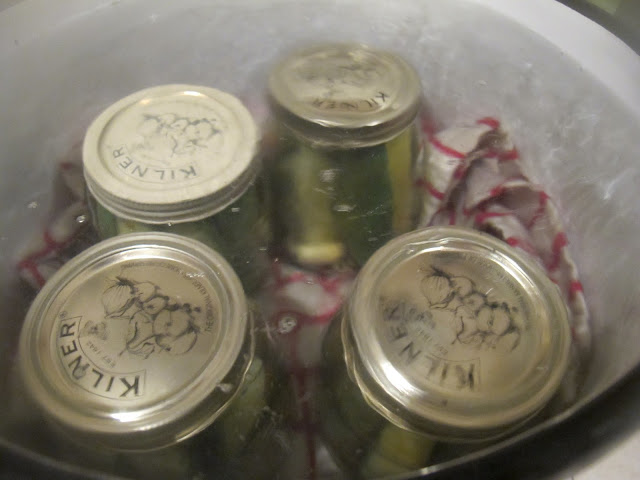 Perhaps the fact that I lacked a proper canning rack to put my jars in played a part? Since I had a hard time finding one, I looked online and took someone's suggestion that a dishtowel at the bottom of the pot would work. But it didn't for me, as the water just never really came to a roiling boil this way. 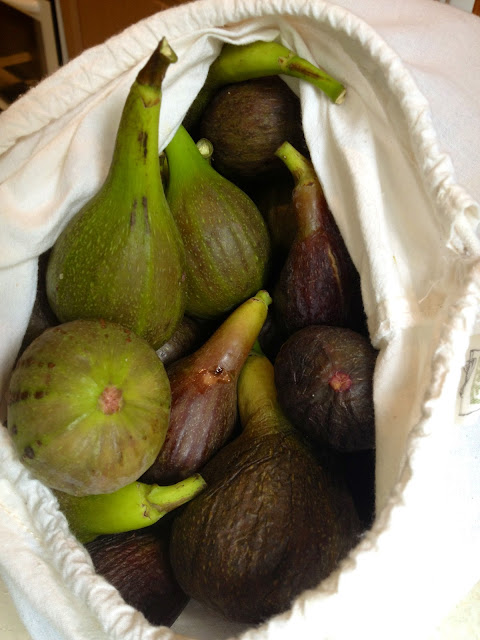 My next project was fig jam. My sister in law has a fig tree which she kindly allows me to pillage whenever I like, which lately has been a lot. After my tea towel in the pot debacle I managed to find a round cake cooling rack, and used that instead. It worked pretty well, though my jars still didn't produce that satisfying ping sound which indicated the vacuum seal has been formed. Again, that only means the jam had to be refrigerated and eaten within the next few weeks. I gave the first jar to my sister in law, who loved it. This recipe came from another book I'm trying out right now: Marisa McClellan's Food in Jars. 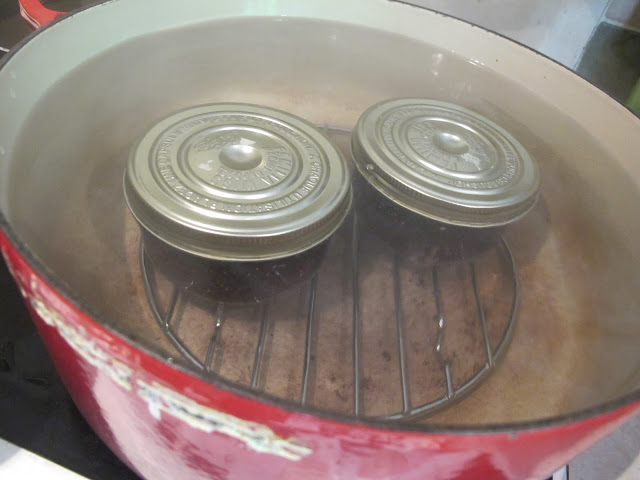 I also attempted, but didn't photograph, oven canning, which a whole bunch of online canners swore by. This is where you sterilize and seal your jars in a hot oven rather that in a water bath. It was a disaster. I had the heat up a little too high, and the jam bubbled out of the jars and oozed all down the sides. So those weren't sealed at all. Now I have a LOT of fig jam that needs eating in the next few weeks. Luckily I love it, so I might succeed. 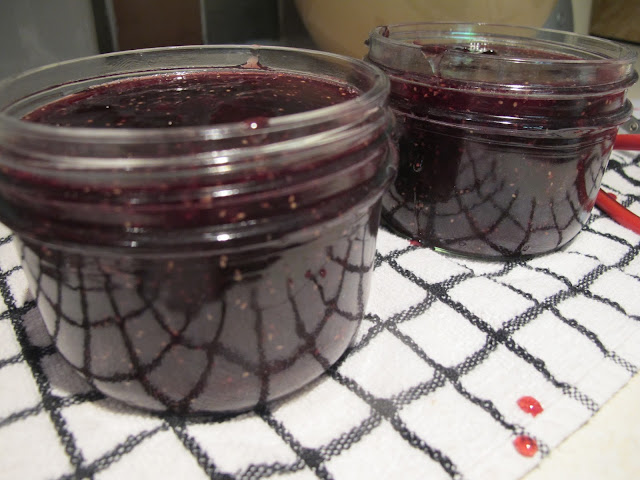 Smaller jars are better than super big ones, like the pint jars of green gage jam I made (see top photo). Even if the seal doesn't work out (and I'm sure for those less culinary challenged folks the seal isn't such a problem), a small jar of jam can be eaten in short order without fear of spoiling.

My final Pete Tong moment was with the aforementioned green gage jam, which is so unbelievably sweet and cloying that even I can't eat it. I used a type of sugar that read "Jam Sugar" on the bag, and the crystals were gigantic. Since I don't know one type of sugar from the next I figured it was the right kind, but I think as its so chunky I could've used half the amount called for in the recipe.

Before I abandon canning completely, I still have a lot of beets, french beans and cabbage that I need to do something with. Pickled beets with ginger, dilly beans and kimchi are all on my wish list of foods to make. 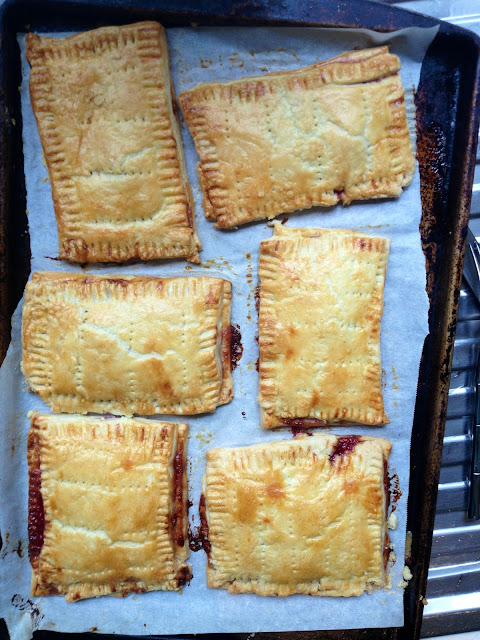 On a more optimistic note, I have learned to make homemade pop tarts with a fair degree of success. This recipe, also from The Homemade Pantry, was pretty foolproof. The problem with the pop tarts is that, like so many delicious things made from scratch, they take too long to make relative to how long it takes to eat them. Fortunately, pop tarts are already a food I no longer buy. But its good to know how to make them, and how to make lots of other basic but delicious stuff like butter, fruit roll ups and "car snacks", aka yummy cereal bars. 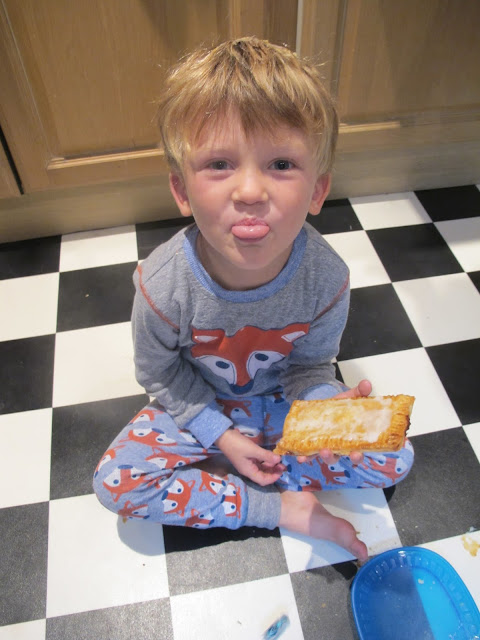 The truth about the pop tarts is that only one of my kids actually really likes them, and its not the one shown here. Which just means more for me.