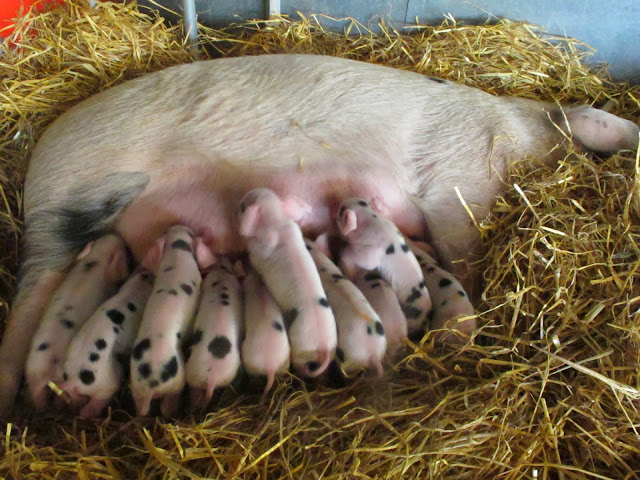 Back in the spring of last year, we got our first pigs here on the farm-two Gloucester Old Spots. Yesterday morning, one of them gave birth to ten piglets. The ironic thing about newborn piglets is that they come out all together, encased in a birthing sac, like sausages. Then one by one, they pop out and separate. Once they start feeding, they each choose a teat from their mommy, and like a sippy cup marked in indelible ink, they use the same one for the rest of their nursing careers. They are incredibly organized animals.

I was at my son's rugby match when the actual birthing took place, so I don't have photos to share from yesterday's excitement, but I think mommy pig deserves a big round of applause for her amazing delivery. And a big thanks to our neighbors Kitty and James, who are lending us space in their barn for the happy new family to stay for a while, til they're big enough to move up to the pen in our field.

Email ThisBlogThis!Share to TwitterShare to FacebookShare to Pinterest
Links to this post
Labels: homesteading, life on the farm, newborn piglets 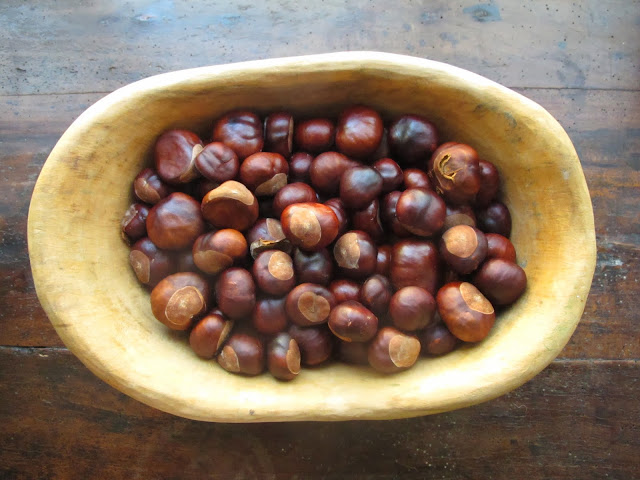 When my husband was a kid, the thing he most looked forward to every autumn was conker season. Conkers is one of those games that fills Englishmen of a certain age with wistful nostalgia, and Henry is among them. While he was showing our boys how to string them up and play, he started reminiscing about the various methods he used to make his conkers stronger; things like soaking them in vinegar and baking them in the oven. He even remembered having made a clay sculpture at school of the inside of a horse chestnut seed, which I promptly ran to my in-laws' attic and found. 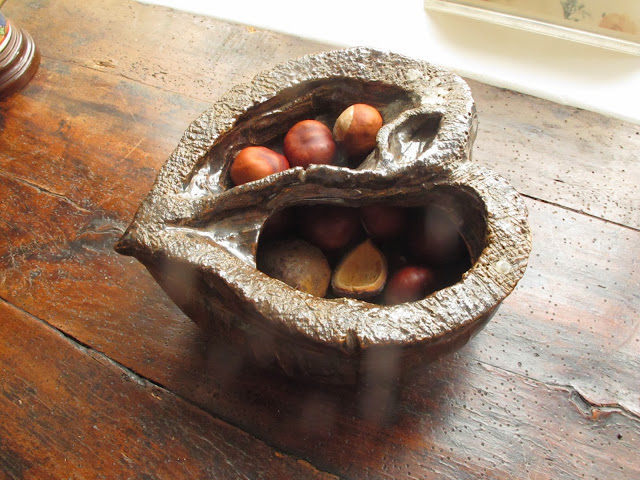 Now I'm using his conker sculpture to display the conkers my kids keep bringing into the house. 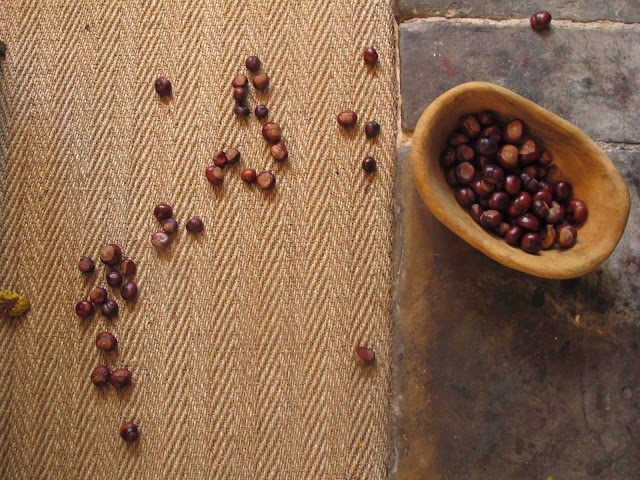 I keep finding them all over the floor, on the table, in the kitchen. Jake keeps his own bowl of them on his desk. They're so pretty, I don't really mind. But I know that soon some other interest will supercede this one, and the conkers will slowly disappear. Til next year, anyway.

To play conkers, you'll need at least one other player, and you'll each need the biggest and best looking horse chestnut you can find, and a shoelace. Ask your grownup to find a sharp something, like an awl or meat thermometer or similar, and poke a hole from top to bottom right through the middle of the nut. 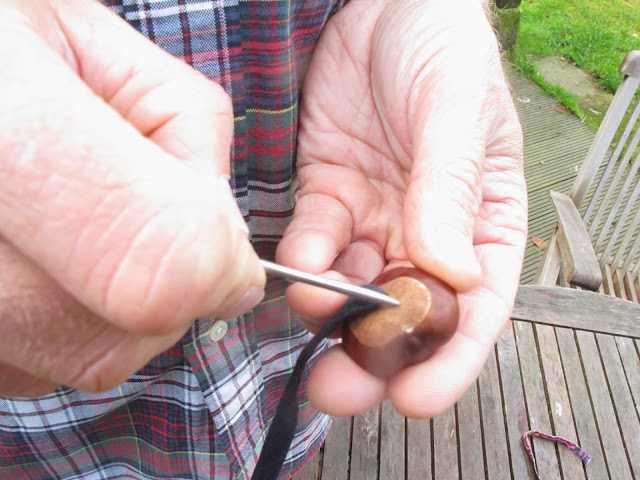 Push a shoelace through the hole, using your awl or tool to guide it. Tie a knot or two to the bottom of the string as shown below. 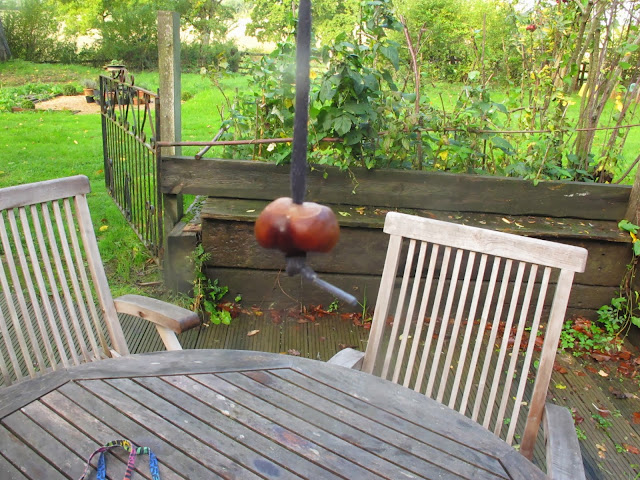 Now you're ready to play. Each player takes a turn whacking the other person's conker, with the ultimate goal of whacking the opponents' conker off of his string. For each conker you succeed in dispatching, you get a point. If you've knocked off one conker, your own conker is now designated a "onesie", two and you've got a "twosie", and so on. Henry claims to have once had a "twentythreesie". 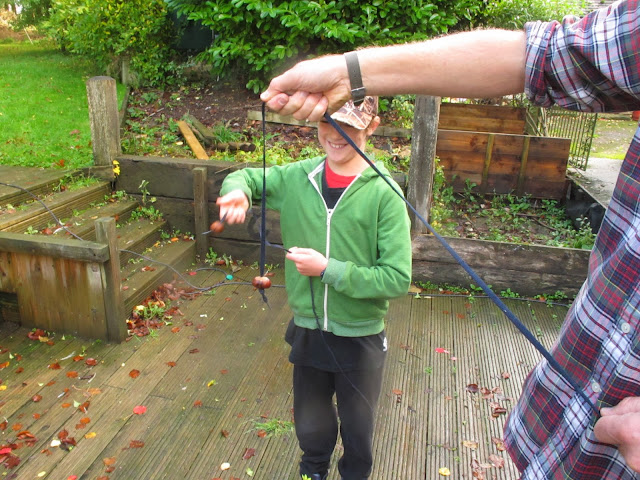 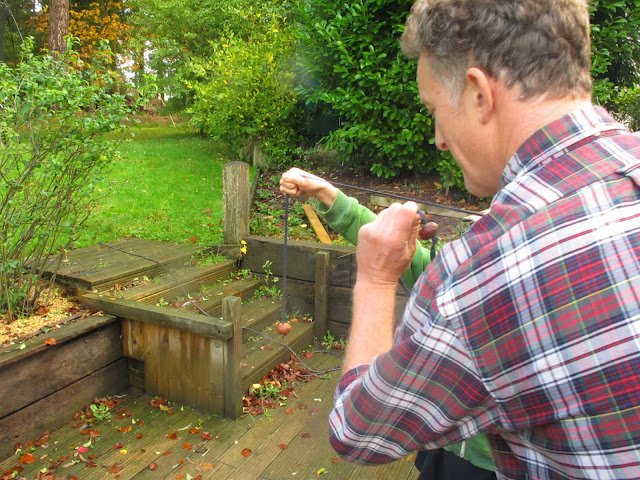 My boys have been on break from school this week, but I suspect next week they'll be sneaking their conkers into school so they can play with their friends.

If you played conkers as a kid, I'd love to hear about any tricks or tips you can share with my boys. Since they're half American, they have a bit of learning curve to overcome.
Posted by Leslie Astor at 4:31 AM No comments:

Email ThisBlogThis!Share to TwitterShare to FacebookShare to Pinterest
Links to this post
Labels: children's games, conkers, horse chestnuts, how to play conkers 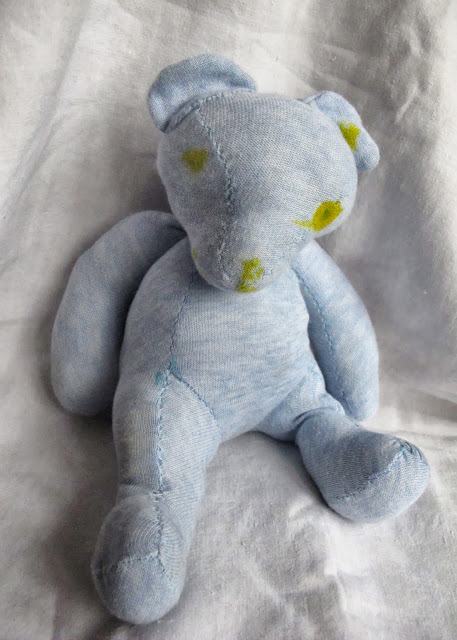 Only one of my three sons ever really took to soft toys. By "took to them" I mean took to hoarding them, sleeping with them, shoving them into random cupboards and nooks around the house. Since he's my youngest, I've only recently taken a stab at learning how to make them myself. Above is an example that shows you how, ahem, adept I am at this craft. To be fair, this was my first effort at a proper three dimensional animal (I've made much simpler soft toys to better results, as I've posted about before here), and therefore not too bad. And anyway, in spite of the very wobbly neck and imperfect stitching, Michael loves this guy. He's made from an old sweater of mine, and hypoallergenic poly fill. Michael didn't want button eyes but drew on the facial features himself. Unlike many of his other soft toys, I know where this one was made and what's inside him. So he's kind of perfect.

The pattern came from this book, which I found in the corner of a thrift shop several months ago: 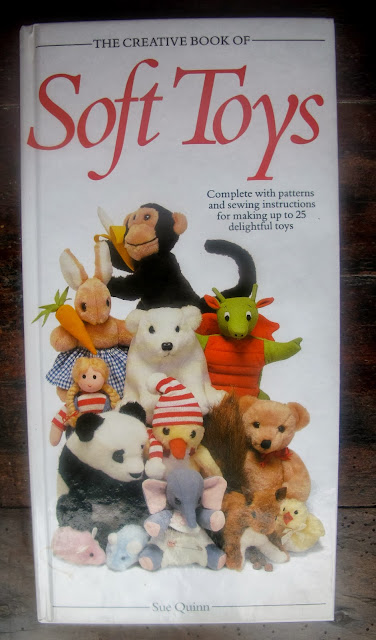 These toys in Sue Quinn's "The Creative Book of Soft Toys" are a little dated, and I prefer linen, wool and other natural fabrics over the fake fur called for in most of these patterns. Also, the included patterns had to be enlarged before use, which is a bit of a drag. 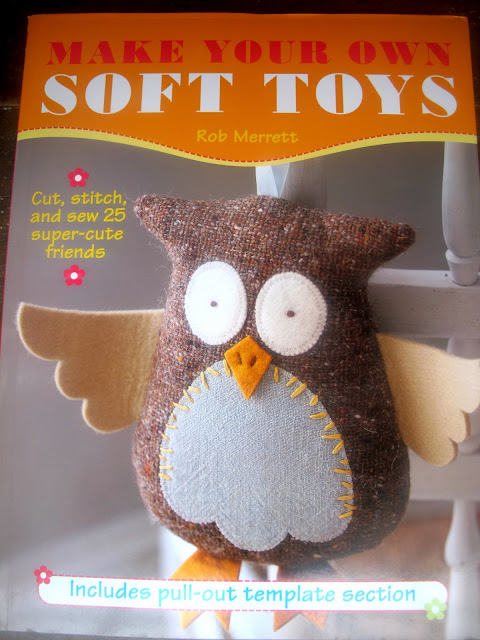 This book arrived in the mail today. Rob Merrett's "Make Your Own Soft Toys" is filled with projects that are a little more to my taste, including a section on making some lovely dolls, which at the moment I have no use for. It also demonstrates mixing up fabric types to whimsical effect, and the included patterns are all full sized and ready to use.

I'll post any projects I complete in the near future, and would love to see or hear about any soft toys you've made for the little people in your life.

Posted by Leslie Astor at 5:59 AM No comments:

The Fungus Among Us 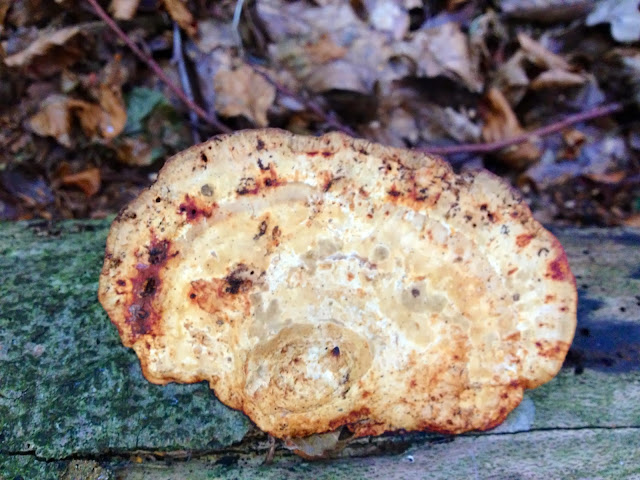 I'm trying a new thing when I walk in the woods these days, to help me slow down and look a little more mindfully at all that crazy beauty around me. At least once a week, I now pick one thing to focus on as I go, and paradoxically, I see a lot more of everything that's out there. It doesn't make for a very brisk walk, but it seems to be working some other kind of muscle, because I always come home feeling really good afterwards.

Two days ago I chose wild mushrooms. Henry has some crazy scheme in the works to start growing our own edible wild mushrooms out in the woods, and I've been instructed not to touch the pack of spores currently sitting on the top shelf of the fridge. I'll keep you posted of course, on how that project pans out.

In the meantime, here are a few (seriously, there were a lot more), of the wild mushrooms of Bruern wood: 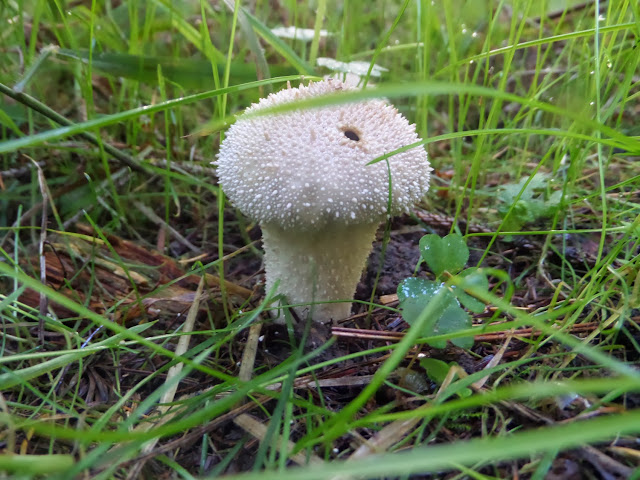 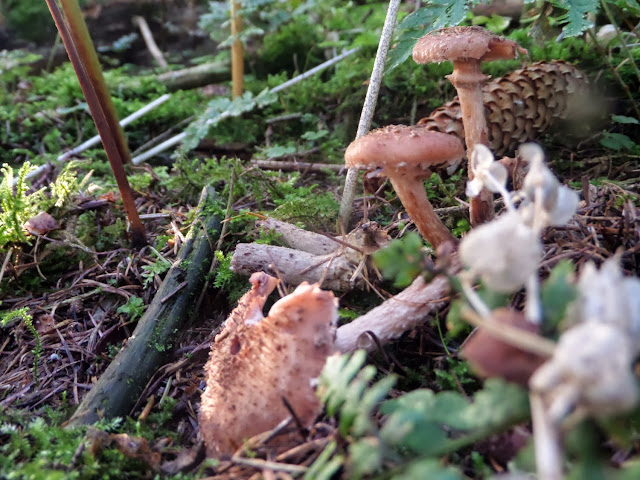 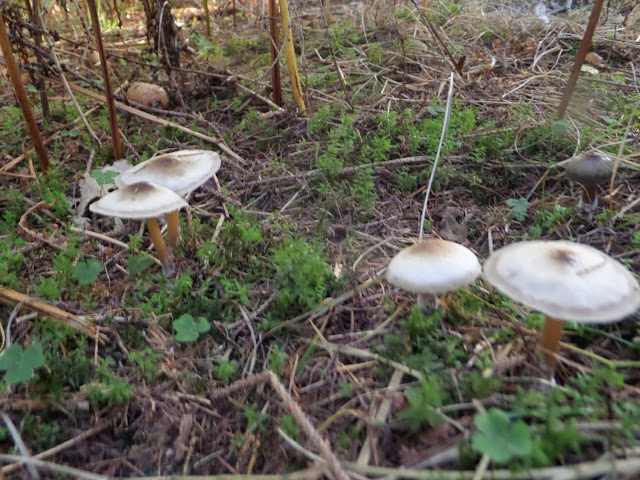 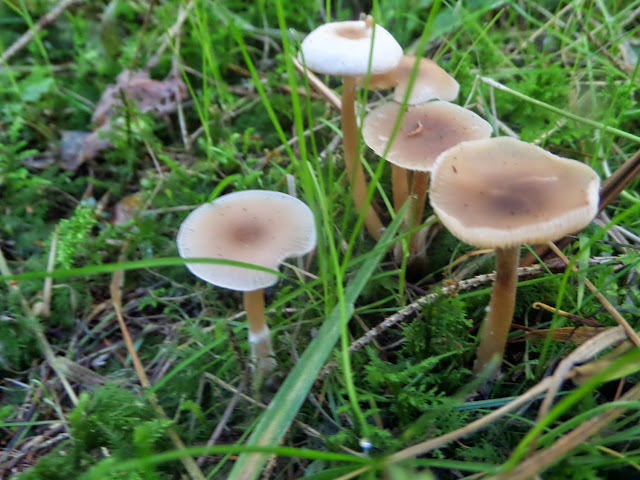 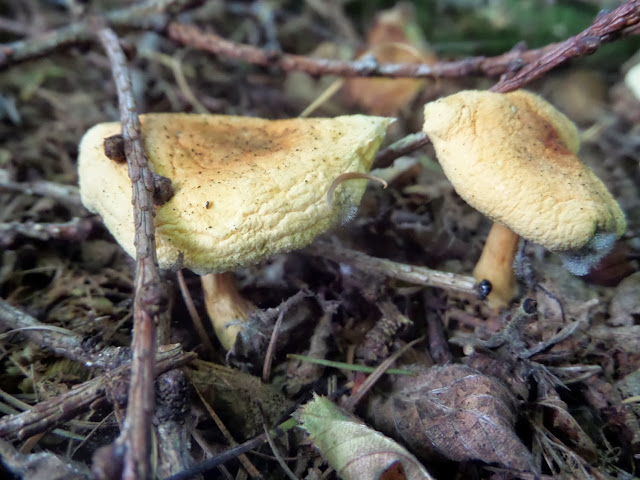 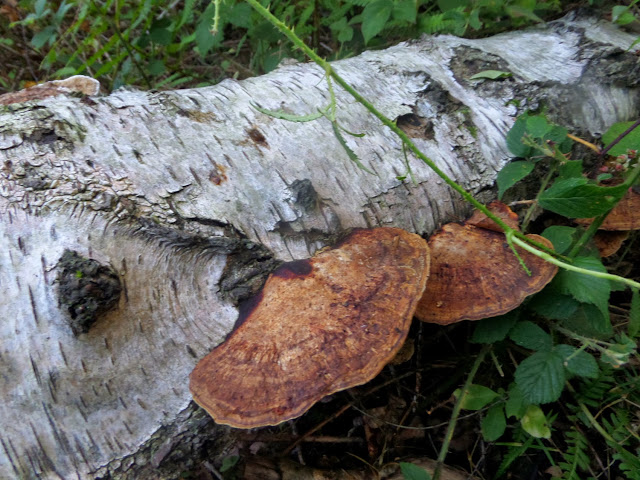 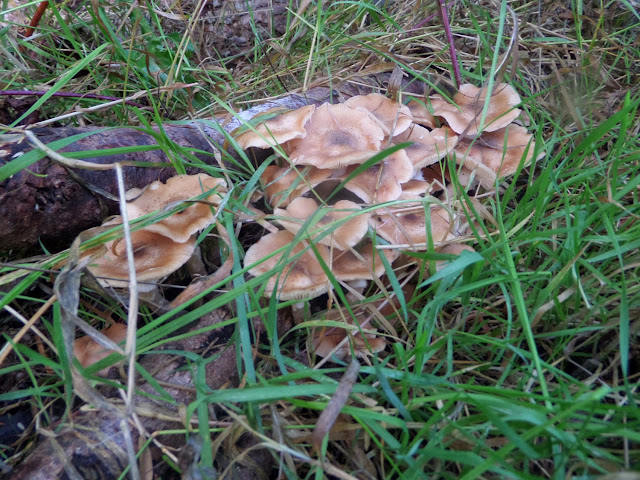 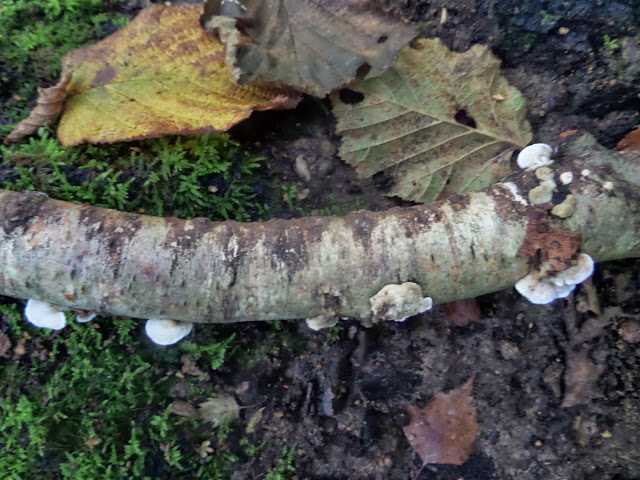 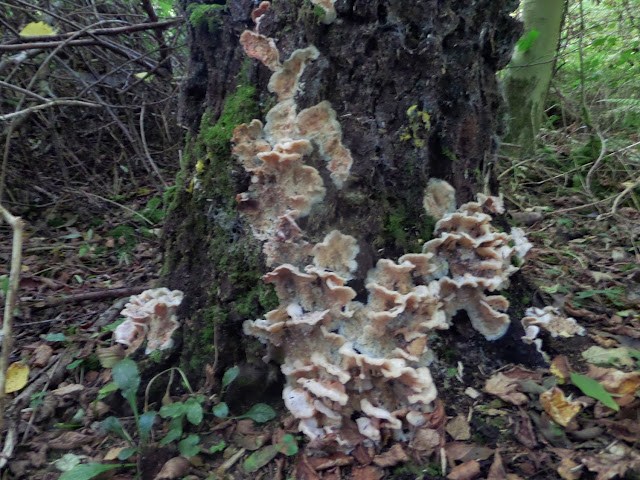 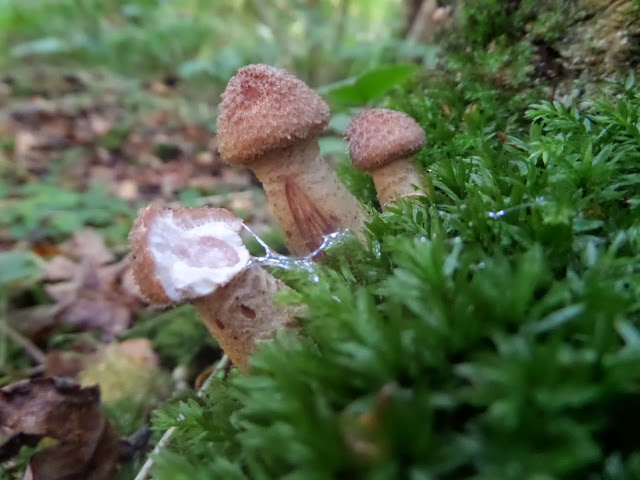 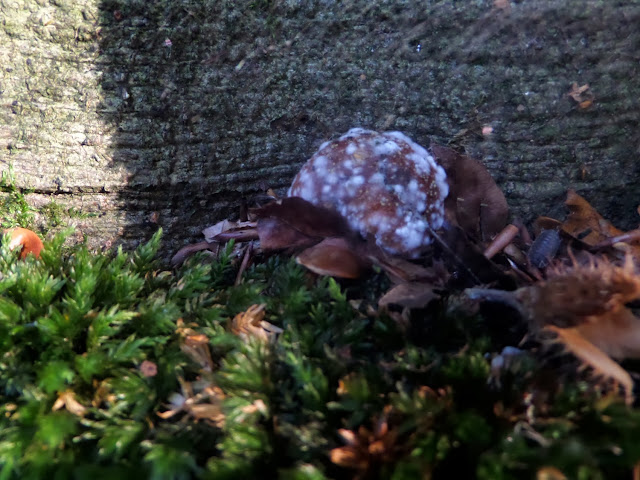 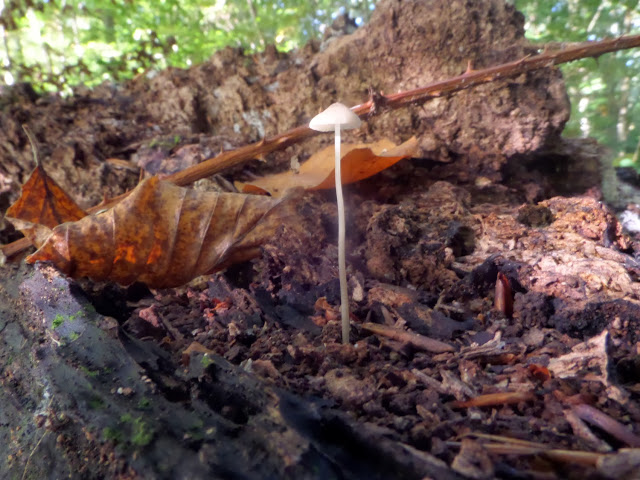 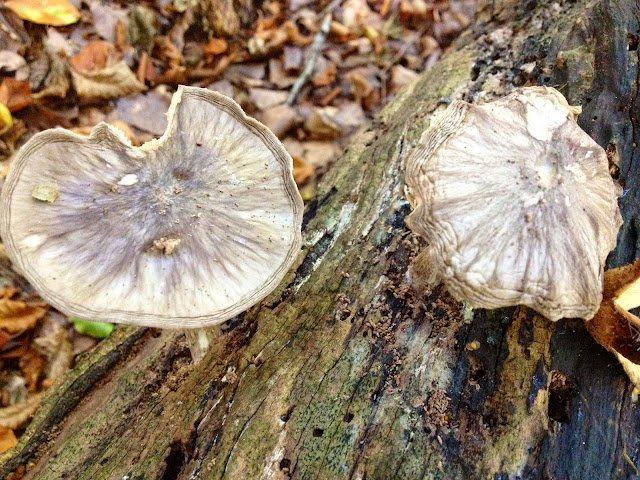 Posted by Leslie Astor at 2:07 AM No comments: