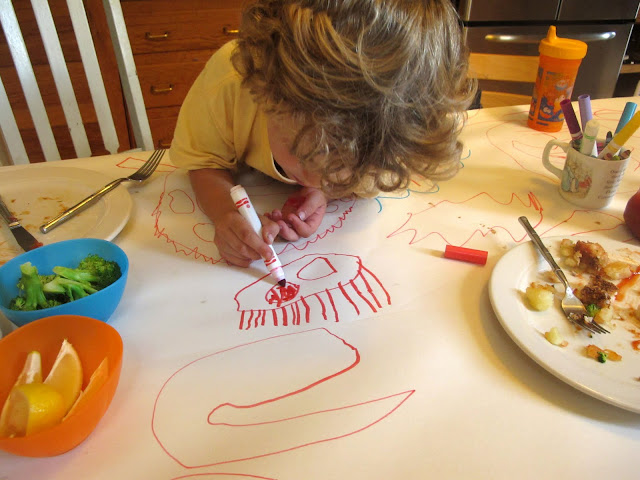 A couple of months ago, Henry and I took the boys out to dinner at a local, kid-friendly diner. We don't eat out too often as a family, in part because I like to cook and eat at home. But the bigger truth is that eating out with three small boys is always a crap shoot in terms of whether or not we'll make it through the meal before someone, or everyone, melts down, or starts screaming, or breaks something, etc, etc. We prefer to keep the madness of mealtimes within the confines of our own home. But at this particular dinner at Dizzy's, the boys were pretty well behaved. We sat down, and the server immediately came to the table, which was covered in a sheet of butcher block paper, and handed the kids some crayons. They began drawing, quietly and with some focus. Henry picked up a crayon and started coloring too. We started a conversation about the pictures, and were generally enjoying ourselves. Though we've been to this restaurant several times, it was on this visit that Henry and I looked at the boys coloring, looked at each other, and shared an a-ha moment. Lots of family restaurants offer paper and crayons, and they do it because experience has showed them that kids respond well to it and enjoy it. The look Henry and I exchanged in that moment read: "Why aren't we doing this at home??"

Well, now we are.
Our first instinct before we implemented this idea was to go online and find one of those beautiful vintage butcher block rollers, which the restaurant uses. But A) Did we really need to spend the money on something like that? (No.) and B) Did we have space for something like that? (No again). Instead I opted to keep the paper roll under the table, so we can tear sheets off when we want them without taking up any additional space in the kitchen.

Our kitchen table is a pretty humble piece of furniture. Henry bought it off the street from someone for $40. I keep it covered with a William Morris oilcloth I picked up in England a few years ago, because its pretty and easy to clean. But now before dinner the tablecloth comes off, and the paper goes on. I installed the roll of paper with some cheap curtain hanging hardware I picked up at Ikea. Any kind will do; the brackets only need to be long enough to accommodate for the width of the roll of paper, and the rod inside is removable so the paper roll can be easily replaced. Its a bigger version of a paper towel holder, really. Here's a photo of the table with the cloth on it, and another showing the roll from under the table. I circled the brackets which are kind of hard to see. 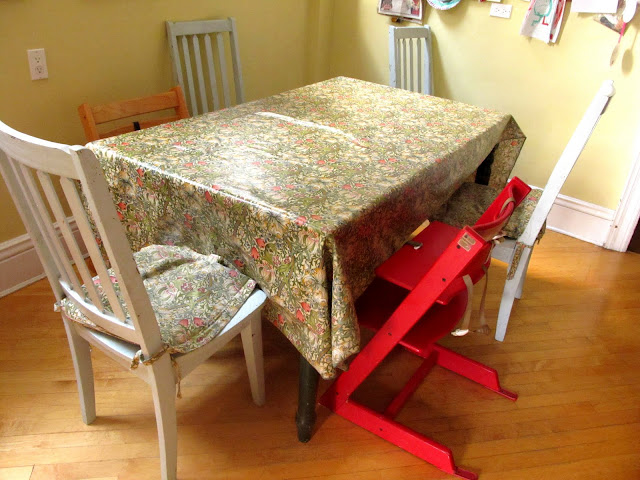 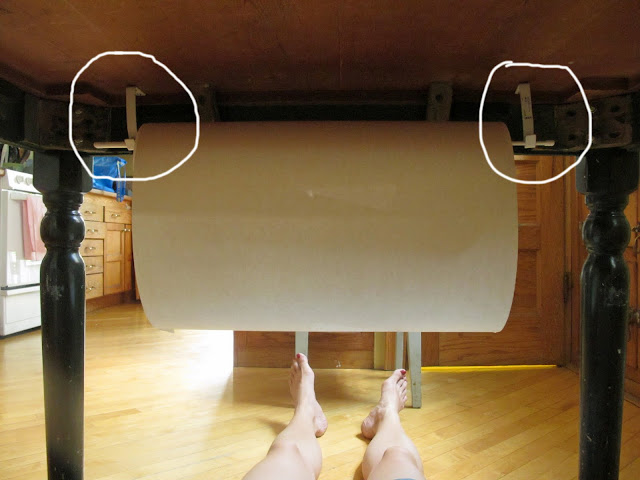 And here's the table before dinner: 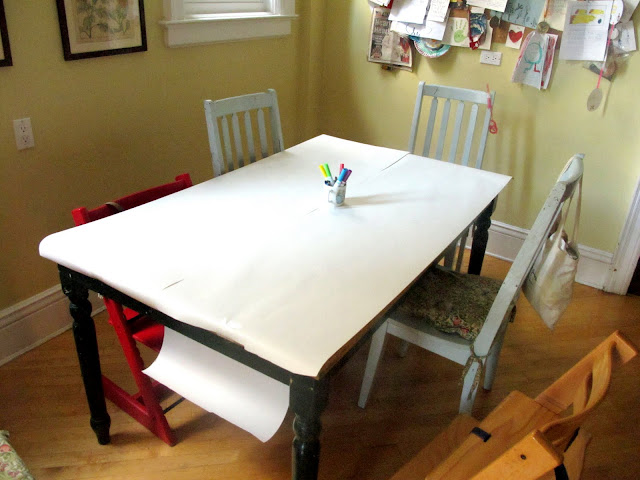 Dinnertime is still a big challenge for Henry and I in terms of our ideal not matching up with our reality. We make a concerted effort to gather at the table with the kids several nights a week because we want to reap the benefits of a shared time together where everyone can connect and talk about the day that was. And we want it to be peaceful and to go smoothly. But the truth is we spend much of the meal asking the kids to sit down, commanding them to eat, admonishing them for their language or not minding their manners. We chase Michael with forkfuls of food and insist that Charlie eat his fish. Since we've been drawing at the table, though, we've been having a little more fun. No diversion keeps young kids occupied for long, and we are trying to recalibrate our expectations accordingly. They still whine, or sing too loudly, or spit out bites. But we've noticed that they're staying around the table a little more. Charlie in particular, my boisterous three year old, loves drawing at dinner so much that he rotates seats throughout the course of the meal when he runs out of paper in the space in front of him. So even though we still have to feed him, he's so invested in staying at the table that our job has gotten a lot easier. And rather than talk about his day at school, we talk about the dinosaur he's drawing. Or rather, he draws a shape and asks us "What is it?" Then he modifies or embellishes the shape based on our answer and asks the question again. Its a little like taking a rorschach test at supper. 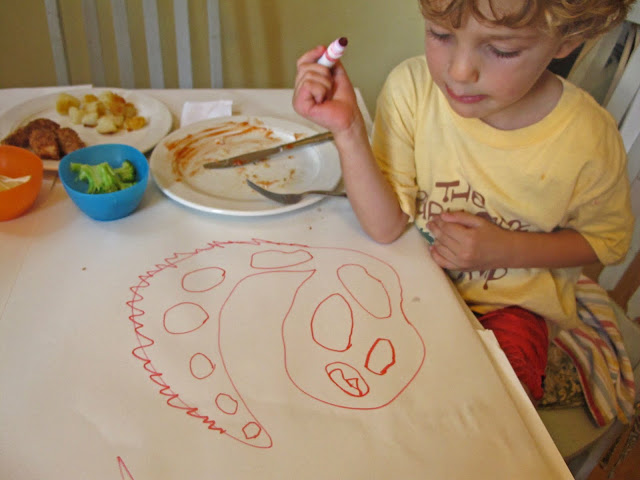 Here's Michael drawing while he waits for me to finish making dinner. Once the food is on the table though, he's usually outta there, running in and out of the kitchen between bites of food. But for now at least, he's never very far away. 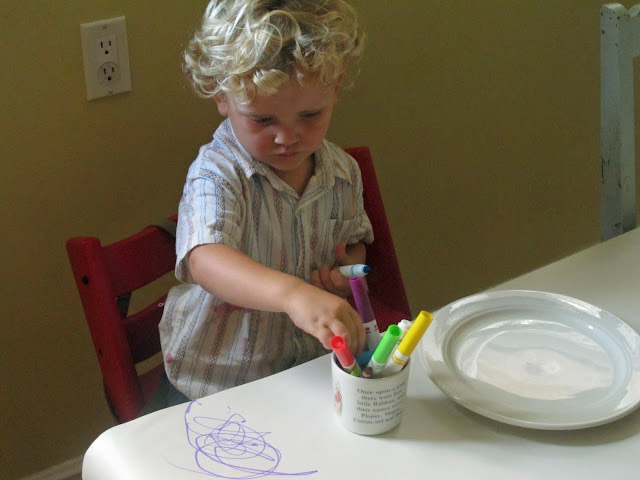 Here's a song we love to listen to any time we're in the kitchen, performed by our local kid rocker, Dan Zanes.