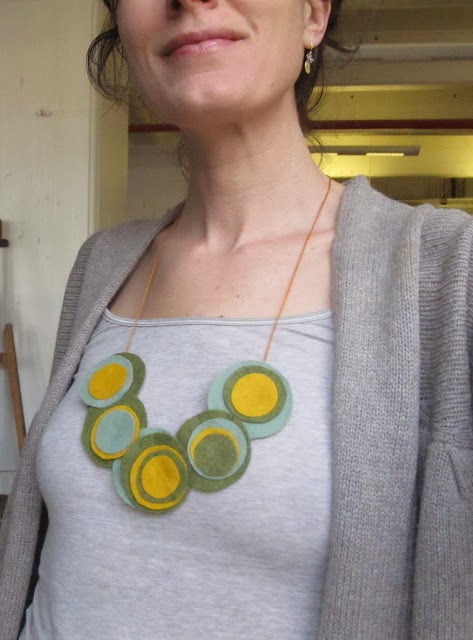 I'm in my studio today trying to work on a new project, but apparently the muse has left the building. Some days are just like that; I'm lacking inspiration and can't seem to get anything on my to-do list done. So instead of trying to force ideas to come where none currently exist, I started playing around with some random materials I have lying around. And without really trying (sometimes I think trying is the worst way for me to do anything), I whipped up this felted coin necklace. It took me about 30 minutes to make. (I already had the felt circles cut out for another thing I'm making, so it might take up to an hour from start to finish.) I really like jewelry, but I'm always losing it (please don't ask me about my engagement ring), so I hesitate to ever buy any. But I really like the way this turned out. I hope you do too, because the chances are pretty good that you'll be getting one for your next birthday.

If you make one of these or something similar, please share your results with me. I'd love to see what you made!

So the first thing I did was cut out a bunch of felt coins. The easiest way to do this is to cut half circles on a folded piece of felt. I happen to have a plastic template with various size circles that I used. If you don't, make your own templates by tracing several different sized circles (mine were 2 1/4", 2", 1 1/2", and 1" across), onto paper, cutting them out, and folding them in half. Then trace and cut them out on the folded edges of felt. 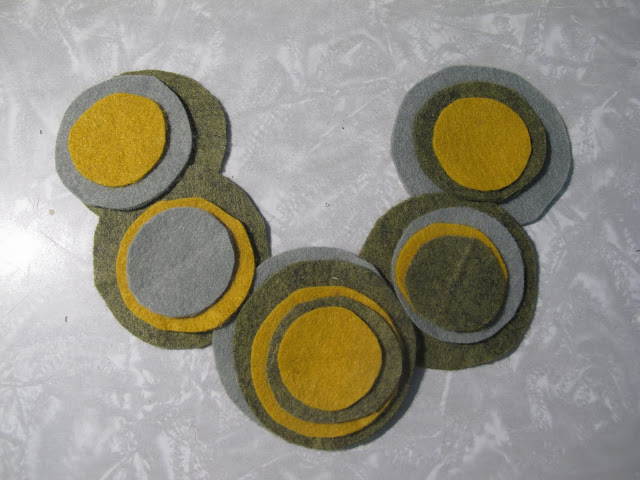 Next I layered them on top of one another til I had a design I liked. Using a glue gun, I attached each coin to the one below it using just a drop of glue. I also used a drop of glue to attach the largest pieces where they overlap with one another to hold the whole thing together in one piece. 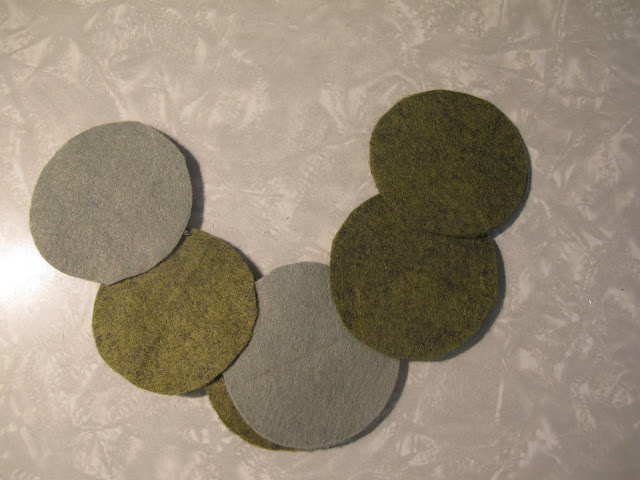 Next I flipped the whole thing over. Its still pretty flimsily constructed at this point, so I used some embroidery floss to carefully sew together the largest edges between pieces. I made sure to keep the thread hidden from the front of the necklace by sandwiching the stitches between layers. But in the end the stitches in the back will be hidden also. 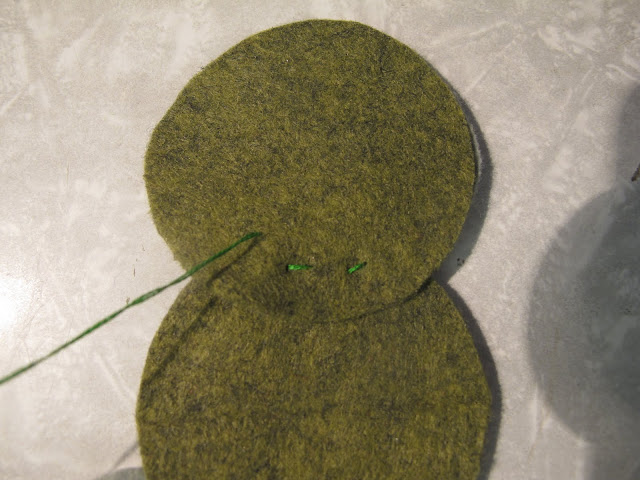 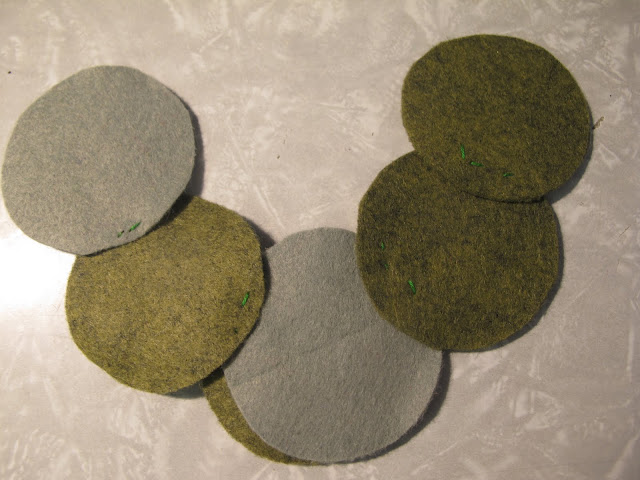 Next I attached the string. I chose a mustard colored embroidery floss that complements the gold coins in the necklace. I used all six strings of the floss and cut out a length of about 24". While I wanted the necklace to sit higher up on my neck, I permanently attached the string to the necklace, so it needed to be long enough to fit over my head. You can adjust the length of your thread to suit your taste. 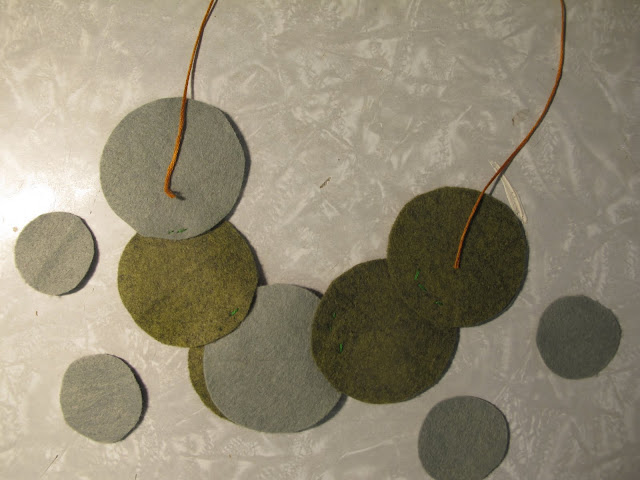 Before placing the thread onto the necklace I ran it under a hot iron to get any kinks out. I placed it on the coins as shown in the photo above, and using the glue gun, attached it with another smaller coin to the back of the necklace. I attached additional coins over the parts of the back where any thread was showing, so the whole thing looks nice and finished, even from the back. 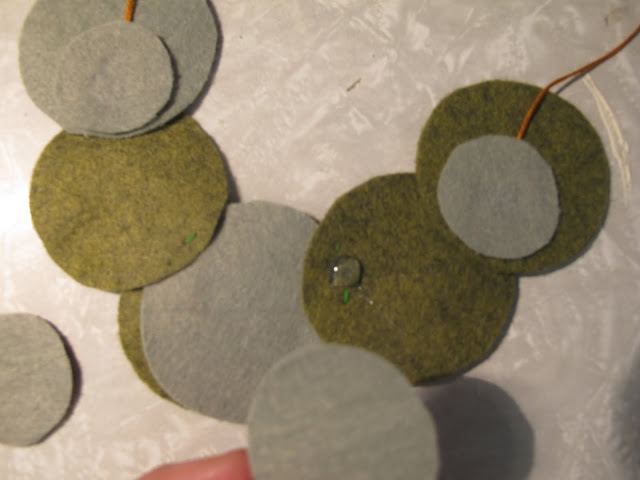 And here is another shot of my creation. Now back to the drawing board with the aforementioned mystery project. Or maybe I'll just go home. 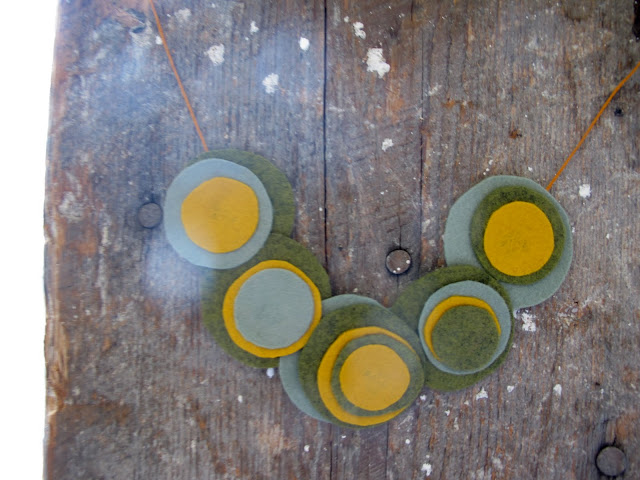