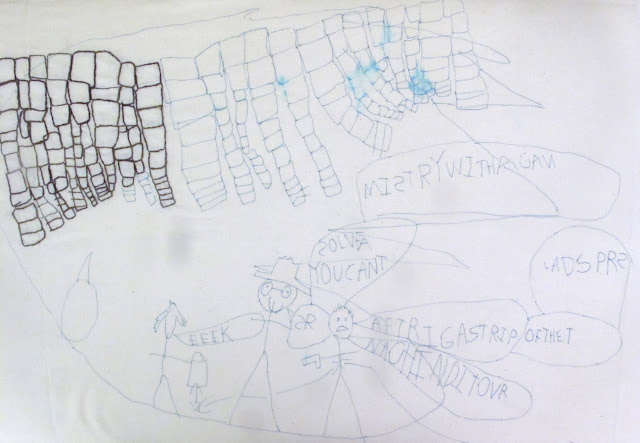 Now that we've fallen back with the clocks and the nights are about to get very, very long, I'm trying to recommit to finishing up a bunch of abandoned craft projects that I had started but never finished. The first thing on my list to work on is this embroidery project that I began about 3 years ago, after I first let Jake watch the original Superman movie. Pictured above you will find Jake's interpretation of the attempted mugging scene from said film, which made a deep impression on him. In this scene, Lois and Clark are stopped in an alley at gunpoint by a very bad man who shoots at the pair in the kerkuffle that ensues when Lois tries to be a sassy smartypants, rather than just hand over her purse. In Jake's translation, Lois (far left) screams "Eeeek!" while mild mannered Clark nervously reasons with the mugger "Sir, you can't solve a mystery with a gun." (I believe the actual words Clark utters are "Sir, you can't solve the world's problems with violence."). The mugger replies: "After I just rip off this lady's purse-now hand it over." I LOVE the details in this drawing; the bricks in the background indicating the location, Clark's hat and glasses, Lois's purse, the mugger's gun. The dark lines in the brick show where I've started embroidering so I've still got a long way to go. When its finished I'm going to make it into a pillow for Jake's room.

Detail from the Superman mugging scene: 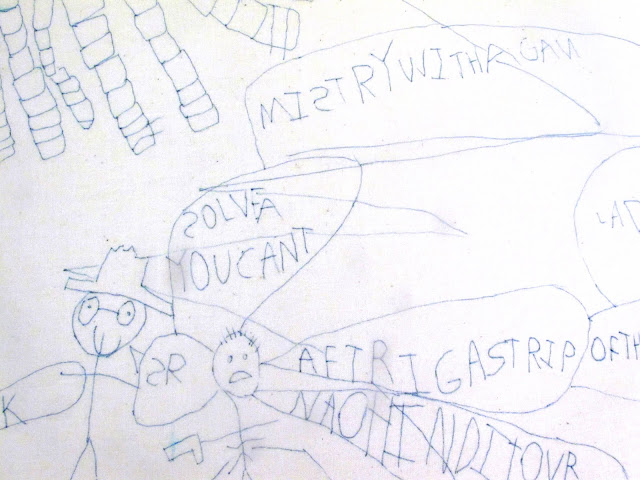 Sometimes my kids' drawings are just so special to me that I take the liberty of reappropriating them into art of my own. In this picture, and the additional examples that follow, I've taken drawings that my kids have done, transferred them onto fabric and embroidered them. I love this idea so much-and I'll give props here to the mom whom I most hate to love (because I so deeply respect her lifestyle yet fall so short of emulating it), Amanda Blake Soule, from whose book The Creative Family I got this idea-that I had planned for a time on starting a business translating kids drawings into embroidered art. Alas, I somehow wound up making tote bags instead, but no regrets. I've taught Jake to embroider too, and he will occasionally sit with me and stitch a few lines still.

Here is another one of Jake's early drawings of a giraffe that translated beautifully into an embroidered image that now hangs in Michael's room. Jake actually did a series of these giraffes; I can't find the original one that I used for the embroidery art shown below this image, which is another great reason for stitching a good drawing-it'll last longer! Jake was five when he drew this. I was so moved by his having included with the giraffe a thought bubble, into which he drew a heart, then another heart inside of which he wrote his name. I'm not sure what he was thinking at the time, but I'm pretty sure it was something happy. 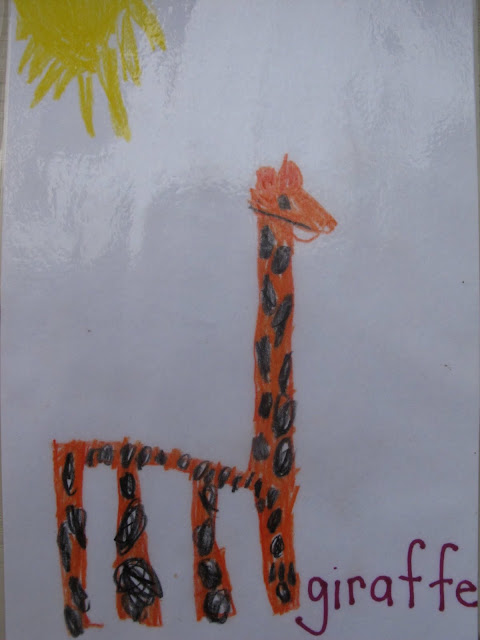 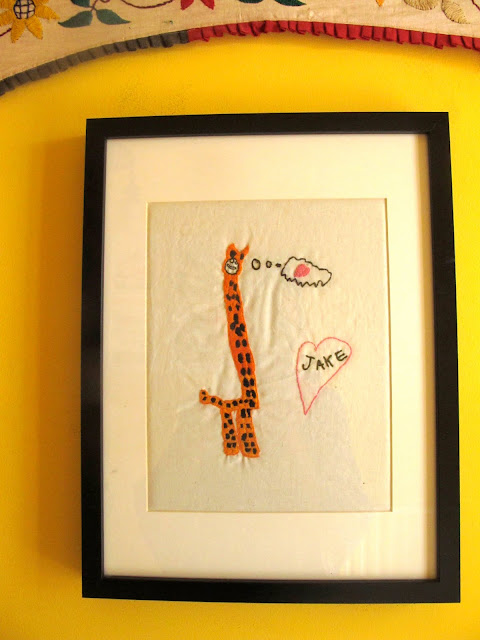 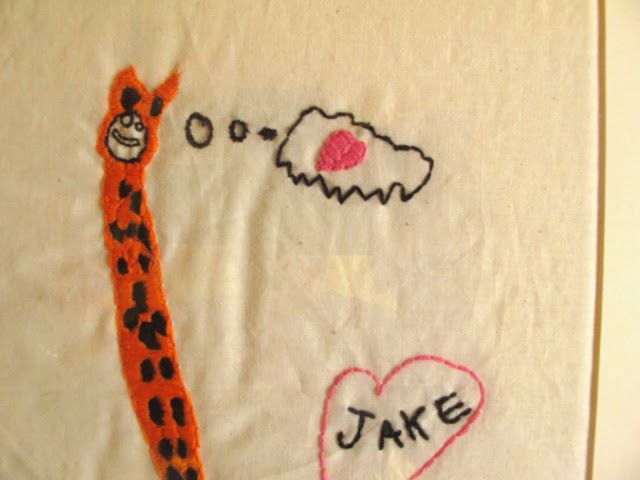 Note that the fabric is a bit puckered around the image in this drawing. I used plain muslin cloth for this project, but I'd recommend a natural linen for better results, since the weave is wider. I'll also add that to transfer the Superman drawing, which Jake drew on a letter sized piece of paper but which I wanted to put onto a bigger piece of fabric, I used an opaque projector to blow up the image, and drew it onto the fabric with a superfine tip marker. For the giraffe, I employed an embroidery transfer pencil, with which you can trace the image directly onto tracing paper, then iron onto the fabric. Be sure to flip your image around first if you're tracing letters. (So trace once, then flip the tracing paper over and trace again from behind; the backwards image will be the one you iron onto the fabric.)

Finally I'll share a much quicker image of Charlie's that I recently made since I'm trying to jazz up his pitifully under decorated bedroom with some cute wall art. I'll leave this in the embroidery hoop and hang it just like it is. I see an image of a mouse in profile, enclosed in a circle. Yes, he's got very long legs. For this picture I gave Charlie a pen and a piece of muslin and just asked him to draw me a picture. I embroidered right on top of his lines. It took me about 15 minutes to embroider. 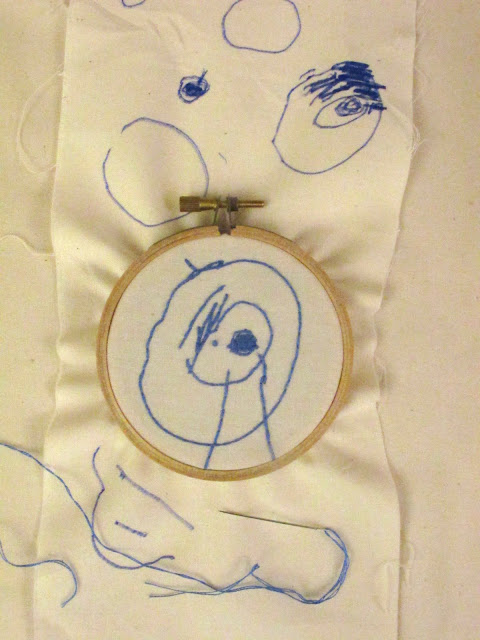 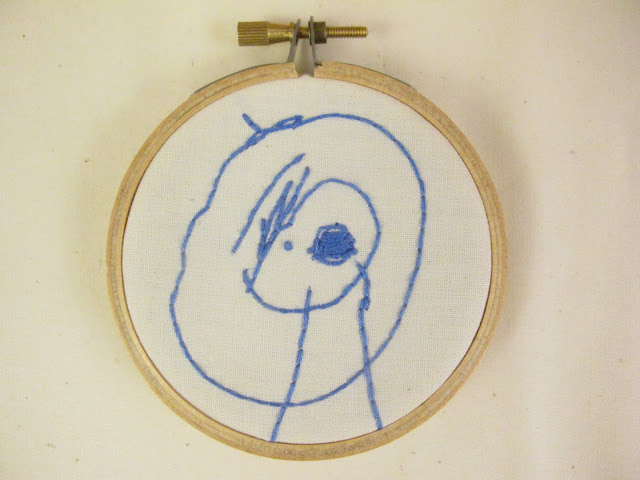 PS, I learned to embroider in just a couple of hours by taking a class with Diana Rupp at the awesome Make Workshop. If you don't live in NYC or can't find a live person to teach you how to embroider, I'd recommend (as Diana did to me) getting yourself a copy of Melinda Coss's Reader's Digest Complete Book of Embroidery, which will teach you way more stitches than you'll ever need to get up and running with this craft form. I'm sure there are plenty of others out there that are less traditional, but this one is a great reference guide.

UPDATE:
Diana recently published her own book on how to embroider call the Embroider Everything Workshop. She teaches you all of the basics and then some, and includes some terrific projects to make. I highly recommend it!