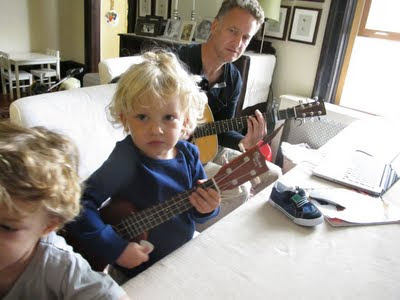 So, the title of this post is a little misleading, because making jam (the fruity, spreadable kind), is still on my list of things to learn to do. Today I'm referring instead to the musical notion of jamming, which happens a lot in my house. I firmly believe that all children should learn to speak a second language and to play a musical instrument. I'm not capable of either. (I did study French for seven years but never had much opportunity to practice speaking it, and I took guitar lessons for about six months before the neck of my guitar inexplicably cracked, so, I keep those things on the same list as jam making.) Fortunately, my husband Henry is a gifted self-taught guitar player, and he often breaks out his guitar when the boys have a little extra energy to burn (meaning, almost daily). We also keep plenty of the standard issue kid friendly instruments lying around; maracas, drums, bells, etc. for the boys to pick up whenever the spirit moves them, but the problem with these is that they often sound kind of crappy. So Henry also invested in a to-be-used-only-with-adult-supervision ukelele for the kids. As long as we keep it tuned it sounds pretty great, even when the kids aren't playing it properly. Its small enough for their little hands, and Henry is teaching them to strum it and play some notes as a precursor to possible guitar lessons a little later on.

Though I can't say that we're total abstainers when it comes to electronics and media in our home, we did ditch our cable a while back, and we've yet to break down and buy a Wii or similar gaming system. We have an Apple TV box, so we buy or rent some kids t.v. shows which the boys get to watch in the hour or so leading up to dinner time, and on weekends. But making music, whatever it sounds like, is one of our favorite go-to activities that we share as a family, and keeps us connected while helping us stay unplugged. Below are two clips from yesterday afternoon that show you the kind of jam we're really good at making. Once I figure out how to make the kind that requires berries, I'll be sure to post that too.