My middle boy, Charlie, is three and a half. As a younger sibling, he has grown up a little more quickly than this big brother Jake, in part because he's spent most of his short life trying to emulate him. This has its pluses and minuses. On the upside, for instance, it means he started riding a two wheel bike before he turned three. He took to potty training more quickly than Jake did. And on his first day of pre-school last September, he practically pushed me out the door at drop off, since he never, ever saw Jake ask me to stick around for a while when we brought him to school.
On the downside, sigh, he possesses certain verbal skills I'd rather he didn't have (meaning, he knows a lot of really bad words). He resists bedtime in a way that Jake never did, because, why should he have to go to bed earlier than any other kid in the house? And he has lost, too early for my taste, a love for some of the childhood characters that his brother loved for so long. Take Little Bear, for example. These books, and its companion t.v. show, were once his favorite place to seek imaginary refuge. What could be sweeter than Little Bear and his friends Duck, Cat and Owl, putting on a play to make it rain? Charlie thought so too, until the day he discovered the Great Hall of Justice.

On the day I dug out an old DVD of Superfriends episodes (the very same ones I watched as a kid), my boy was a changed man. There among the cosmic legends of the universe, Charlie found his people. Superman! Batman and Robin! Wonderwoman! Aquaman! These characters (which as far as I can tell are all voiced by either Ted Knight or Casey Kasem-how did I miss that when I was ten?) are now the people that loom larger in Charlie's life than even the mighty and all powerful Jake himself. Fortunately, we already have a fairly healthy stash of Superhero figures lying around the house from Jake's own period of Superfriend mania. But Charlie wanted more. He couldn't settle for playing with the Superfriends. He wanted to be the Superfriends.

Hence the costume. After begging me for some time for a Superman costume, I made the mistake of mentioning in an offhand way that I'd make him one. Why go to Target and spend money on some crap costume when I could just whip one up myself? Well, let's see. Because I've never made a piece of clothing in my life. Because my sewing machine was sitting untouched in the same spot it had occupied for about ten years, unused for about as long apart from a briefly inspired period of Christmas stocking making two years ago. Because I had no idea how the hell to make a Superman costume. But Charlie heard me say I could do it. And he didn't let it go. Every day he asked: Did you make my costume yet? WHEN are you going to make it? Please, mom? PLEEEEEAAAASE.

So I did what I thought I wouldn't be able to do. I made my boy a costume. I got the fabric. I sat on the fabric for several days. I washed the fabric. Charlie's begging ensued. I went online. I got this pattern from a lady on Etsy who clearly has a sewing machine and who has enough kids to convince me she knows how to use it. Her blog is called Puking Pastilles, and it includes a free tutorial for a superhero cape, if you're interested. Her Etsy shop is here, and its where I bought the pattern for the superhero costume.

Even though I'm a sewing moron, and have a machine so useless it pretty much does only a straight stitch (who needs zigzag?), I surprised myself completely and made the costume for Charlie. Seeing him light up when he put it on (and wore it to school and to the park, and the grocery store), made me feel like Wonderwoman. Miracles never cease.

The song I listened to three nights in a row while chained to the sewing machine to make this costume: REM's I Am Superman. 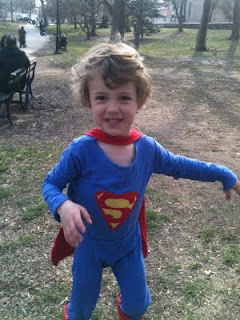 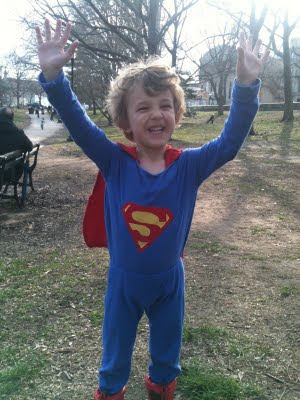 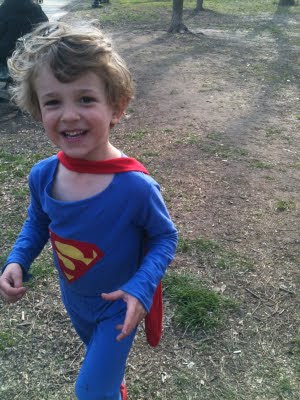